Mutts Work To Do At Ron Jackson

A scant breeze rustles the giant oaks, and then -- a burst of activity! A huddle of girls and dogs spills from a low brick dorm in a far corner of the campus. The chattering hive of pony tails and wagging tails emerges as one, then separates into girl-dog pairs, trotting around the yard. The girls command their leashed canines to walk, sit and retrieve toys. 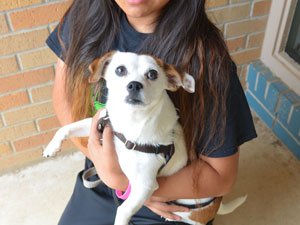 Here at the PAWS Dorm, where 11 girls and their assigned foster dogs live and train, there’s rarely a slow moment, or many contentious ones. Visitors often remark about the “very warm environment,” says Dorm Supervisor Holli Fenton, who helped co-found the PAWS (Pairing Achievement with Service) program at the Texas Juvenile Justice Department (TJJD) nearly 10 years ago. Frequently, she says, visitors say the residence feels more like a college dorm than one within a high-security corrections facility.

The environment owes much to the presence of the dogs, and how the animals, carefully selected from the Corinne T. Smith Animal Center in Brownwood, bring out the best in these youth.

The idea is not complicated – the dogs gain skills, the girls learn responsibility and everyone feels the love. But there are multiple other facets to the program. 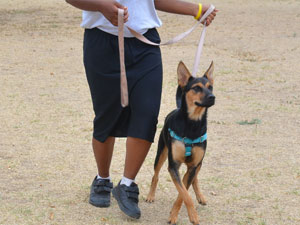 For starters, PAWS acts as an incentive. Girls accepted to work with PAWS dogs must have a record of good behavior and be making progress in classes and therapy. They need the recommendation of campus mental health providers, to assure that they will be good caretakers.

Once living in the dorm, the girls learn dog handling skills and teamwork. The canines require 24/7 care and often their human handlers have to fill in for each other when a dorm mate has other commitments.

The larger Brownwood community has emerged as a big supporter of the program, modeling its own team spirit by robustly supporting Ron Jackson’s PAWS program for the past nine years. Community members have given thousands in in-kind donations, such as free routine vet care (Dr. Joe Speck) dog food (Ag Mart) and equipment (the Ron Jackson Community Advisory Council) and regular cash contributions (from the Brownwood Women’s Club and community sponsor Leona Cleveland, who once organized a Bark-tober fundraiser).

The other key learning taking place at the PAWS dorm is not a social skill like team cooperation, so much as a social fundamental. The girls become more sensitive and caring while minding these animals that are so completely reliant upon them, Fenton says. They are entirely responsible for their dog, which sleeps in a crate in their room, right down to having to trim their canine companion’s toenails. As the partnership blossoms and the dog makes behavioral strides, “you’ll see the kid’s self-esteem go up and you’ll start seeing their empathy going up,” she says.

That’s big, because empathy was likely in short supply in certain environments in the girls’ lives before their commitment to TJJD. Although these young women hurt people or broke things, leading to their incarceration, statistics tell us that they too were likely hurt or neglected during their childhood, often leaving them guarded and withdrawn.

Dogs, virtuosos at drawing out people, are an excellent RX for these hurts, giving freely of their talents: Cuddles without conditions, undying loyalty, sloppy kisses and (yeah, OK, if you insist) obedience. 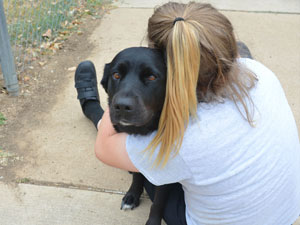 “When they open the door, that canine is really happy to see them and it makes them feel really good,” says Fenton. “It’s very therapeutic. If a youth is having a troubled time, they might want to come and just be with their dog.”

These particular dogs, which were abandoned to the shelter, offer a unique bonding opportunity.

“They feel like the dog and themselves are in the same shoes,” Fenton says. “They know the dog has been locked up and . . . may have been abused.”

“Sometimes when I pet her she’ll flinch,” says PR, a PAWS girl who’s worked for months with her foster dog Smokey. “But most of the time she's good. I helped her break out of her shell,” she says, explaining that the Sharpei taught her to be patient.

Another girl, RH, also cites PAWS for teaching her patience and empathy. After working with at least seven dogs, she still recalls how her first charge needed tender treatment. “One of the first things I learned was empathy with my canine because he had knee problems. I couldn’t force him to walk or do the agility program,” RH says.

The extra effort spent civilizing, cajoling and fine-tuning a dog’s behavior pays off, though, when the animal is adopted, she says. “We help them to get a second chance!”

And don’t forget, chimes in a third girl, it works vice-versa too.

Just like her current dog, an abandoned Husky-mix named Sheba, TB says, “if my family need had been met, then I wouldn’t be here either.” 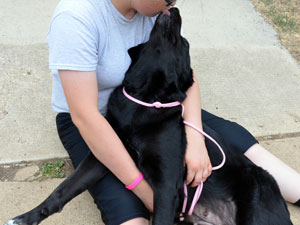 It’s not quite magic, this pairing of needs and know-how, but close.

And now, as the young handlers wind up the day’s lessons, a Labrador mix, a German Shepard mix and a couple wee fur-balls tumble into laps and gnaw on toys.

Romeo, Eva, Asia and Chloe, having done their daily drills, luxuriate in their foster owers' attention, rolling over for belly rubs and accepting comb outs.

“Can you take my picture with her?” asks one girl, hoisting a white and tan bit of fluff onto her knee, tilting her head and smiling. Her small friend, Chloe, neatly coiffed and walking easily on the leash, will soon be adopted.

That’s another life lesson, difficult but a natural part of the program. As the dogs are trained to the AKC’s standards for “Canine Good Citizen” standing, they become more adoptable. Most will find a new home, a big win that is bittersweet.

“Usually the first one (that leaves) is really, really hard,” Fenton says. “We try to have another dog ready as soon as possible. And we let them know, you did really good, you got this dog adopted. You saved this dog.”
(If you have an interest in adopting a PAWS dog, please visit the PAWSatTJJD Facebook page. There you can see dogs that are available for adoption at the Ron Jackson, Giddings and Gainesville facilities.)