Ayres House celebrates recent graduate who's going on to college 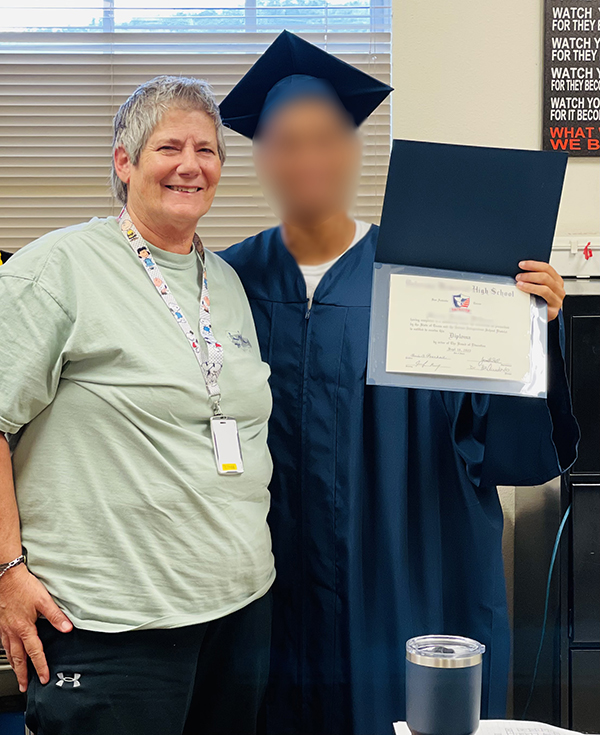 Many youths come to TJJD behind in school, often years behind grade level.

That they were not focused on school is no surprise. Some spent their energy elsewhere, while others lacked the support they needed to succeed in school. A few bad breaks, and a few heartbreaking decisions, and they wound up facing a juvenile judge.

But as in all of life, the past does not have to dictate the future.

As part of their rehabilitative program, TJJD youths are enrolled in school and encouraged to catch up on their class credits. They’re offered tutoring and extra help with reading as well as extracurricular activities that help balance academics.

Some latch on to this second opportunity in a big way.

Ayres Halfway House staff, in San Antonio, recently celebrated one motivated young man, M.W., as he completed his goal of earning a high school diploma before he transitioned back to his home community.

M.W. was determined to finish up his final credits while at Ayres and set himself on a new path before his departure, said Patty Garza, Community & Family Relations Coordinator for Ayres House and South Parole Region.

“He had worked diligently to complete his course work with a goal of a future nursing career in mind,” she said, and he became “laser-focused on applying for college before going home to start his new life.”

He also wanted to keep a promise to this mother that he would finish his high school program before coming back home, said Carmen Terry, M.W.’s case manager at Ayres. He regretted past decisions, wanted to make amends and realized that most of all, “he wanted to make his mom proud.”

But M.W. didn’t arrive at Ayres with that same energy. Like many students who start back to school at Ayres’ computer-equipped classroom, he was only mildly engaged at first, said Ayres teacher Kathy Bullock.

So many TJJD youths harbor negative memories of school or have gaps in their attendance caused by various events and hardships. It’s not uncommon, she said, that the last time they were in school was when they were in middle school. 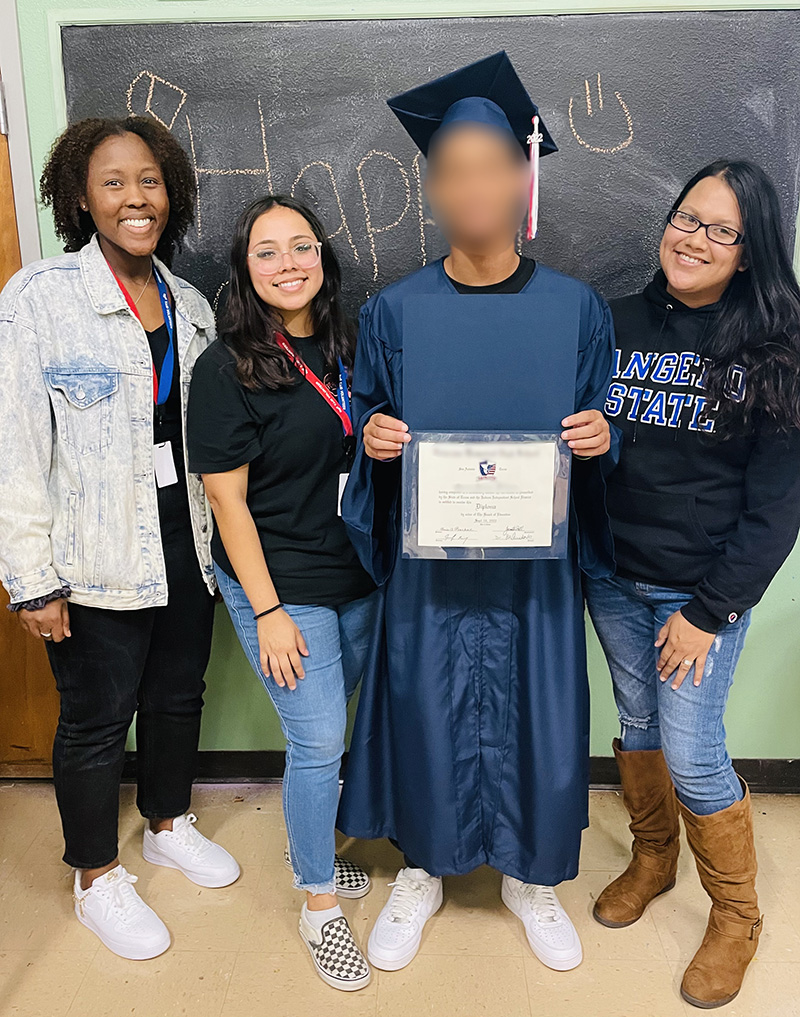 These kids have lost faith in their abilities and find it easier to make excuses than to go all in and make a big effort to resume their academic program, she said.

But as they move through the classes in the self-paced classroom and lock in some successes, “it finally dawns on them that they really can do this, that it is obtainable,” said Bullock, a former public school social studies teacher and coach.

“Then all of a sudden it will click, and that light comes on -- for those that really want it.”

By this fall, several months into his stay, it was clear M.W. really wanted it. He'd powered through summer school. He had a community job. The light was blazing.

“He was gung-ho,” Bullock said.

And as soon as he had his hands on that high school diploma, M.W. turned to the college interns working at Ayres House, ready to take the next step. He asked for their help enrolling in college and filing for the financial aid he would need. That meant filling out significant paperwork, including the thorny FAFSA, required by colleges to determine federal loans and grants.

The interns, T.K. Hooks of UT-San Antonio, Danielle Ramirez of Texas State University and Samantha Medina of San Angelo State University, were happy to assist and being college students themselves they knew the intricacies of the FAFSA.

M.W. was delighted when he was accepted to a college in North Texas. He left Ayres House last week floating on a cloud of optimism and excited about his potential future as a medical professional -- as were his Ayres’ mentors, teachers, and intern helpers.

“It feels good” to send them home on an upbeat note, said Terry. “We’ve had several, like four, who’ve graduated in the past year, prior to them being released.”

“It takes so many hands to help our youth overcome barriers and it most certainly paid off in this instance,” Garza said.