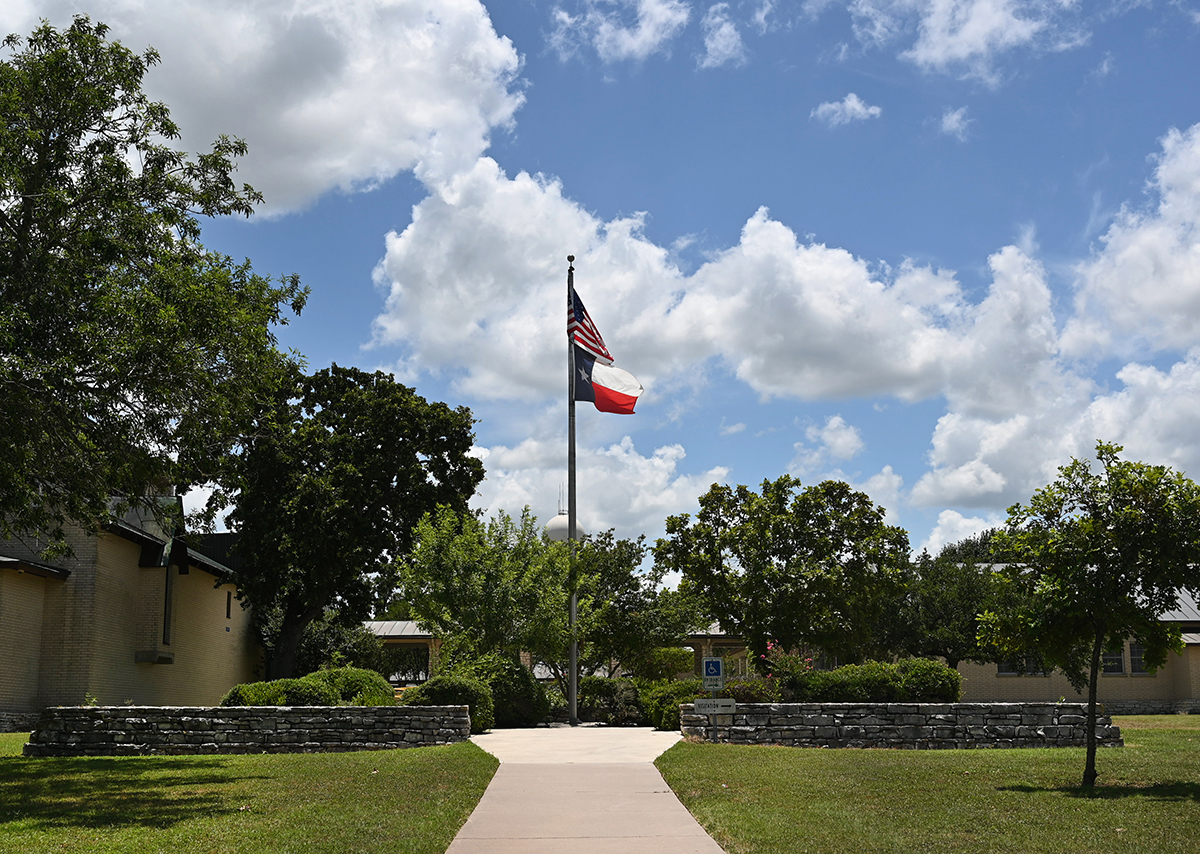 A lot can happen in 50 years. Changes both globally and locally. Shifts in cultural styles and how we live, and unimaginable leaps in technology. In the face of this, it can seem like fifty years ago we might as well have been living on a different planet

But while so much of the landscape around us changes, there are basic and essential things that stay the same. The need for safer communities and the roles that establishments like our schools play in our society.

This October, we recognize the 50-year anniversary of the opening of the Giddings State School, as well as the young people who’ve managed to become productive members of their communities and the men and women who’ve worked so hard to care for these youths.

The campus will be celebrating next Tuesday, Oct. 18, with a commemorative luncheon for community leaders, retirees, and employees of Giddings State School and other honored guests. (Details at the end of this story.)

The school opened in October 1972, but things really got started during the 1969 Texas State Legislature. That was when Speaker of the House Gus Mutscher and Chairman of the Senate Finance Committee Bill Heatly agreed to appropriate $4.5 million to build a school for the Texas Youth Council, later renamed the Texas Youth Commission and then Texas Juvenile Justice Department.

One of the conditions of this arrangement was that they find land for this school that would be donated, so a group of gentlemen headed by Monroe Hannes, the president of the First National Bank of Giddings, wrote a letter to the people of the community asking for donations. 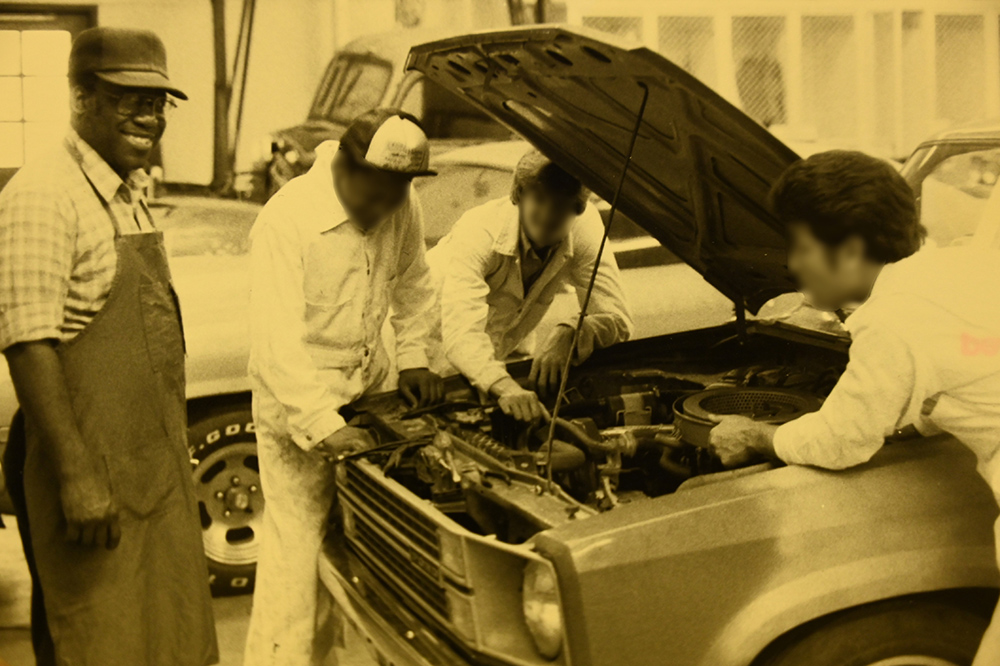 The community apparently liked the idea of housing a new state school because it took them just 24 hours to raise $100,000.

They found the land they wanted and approached the owner, Roy Durrenberger. Durrenberger didn’t want the money but agreed to trade the 200 acres they sought in exchange for another 200 acres nearby.

The first superintendent, Jimmy Freeman, and the business manager, Joe Franks, started on June 1, 1972. “Mr. Freeman hired, by far, the majority of the staff,” Franks said. “From cooks to teachers to case workers.”

The first 12 youths transferred from the Gatesville State School. They arrived by bus and stepped onto the Giddings campus on Oct. 26, 1972.

Giddings first went co-educational in 1974. The program was “unsuccessful”, according to Franks. This was attempted again in 1980. “Well, that’s not a good deal,” Franks said, “because they (boys and girls) can get into trouble real quick. It was a nightmare, so the girls were moved out again.”

Upon the closure of the Mountain View State School facility in 1975, Giddings started getting “older, more sophisticated kids,” Franks said. This led to the school becoming more and more TYC’s main facility for youth committed for violent offenses.

In 1979, the community had become concerned by the rising number of escapes. Several town meetings were held between the school and the community which resolved to have 7,000 feet of 14-foot-high fence with an electronic security system installed around the state school’s perimeter.

The school had been built to hold 480 youths, but well before it ever approached that number, the Texas Legislature changed the Texas Family Code for required square feet per youth in the dorms and those new guidelines dropped the allowable capacity to 256.

Velma Lewis, a Giddings native who’s been employed at the school for over 30 years, spoke of the connections that grew between the school and the community.

“I think the community has enjoyed the school being here,” she said, “because the school was giving jobs to a lot of people that lived here and the surrounding areas. This would help the people around here and they wouldn’t have to travel so far to go to work.”

A Tradition of Campus Teamwork, Then and Now

“When I first started here, the staff was really close. You knew staff on each dorm and when we got off work, we’d go out together,” recalls Teresa Couch, who’s worked for 25 years at Giddings State School. For most of those years, she was a case manager, but now she works as the campus scheduler.

Case managers, she recalls, used to work consistently at a particular dorm. They and the JCOs would stay with one dorm for a long time, months to years. This was when Texas Youth Commission campuses across the state had significantly larger populations, serving youth committed for misdemeanors through felonies. Today, TJJD youth are restricted to felony-level offenses. 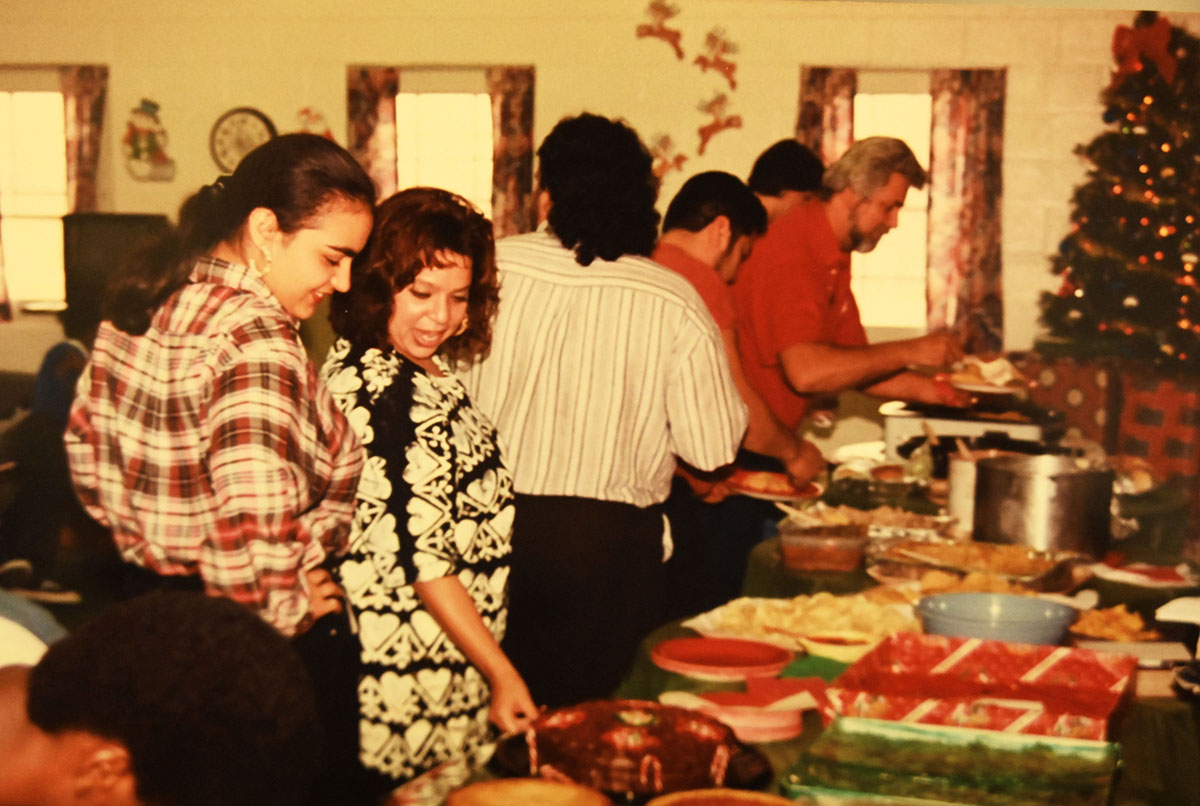 Giddings State School, in that period, was more strictly organized around dorm “families,” Couch said. She recalled how each dorm would host its own barbecue during holidays. Staff would erect an outside canopy and begin grilling to celebrate Juneteenth or July Fourth. They’d have dorm dinners for Thanksgiving and Christmas, and the volunteers would host similar festivities, giving the youth dual celebrations during the winter holidays.

“Some of the best memories I have are from back in the day. We’d have barbecues or dinners on the dorm, and all the staff would bring in entrees for dinners or potlucks on the dorm.”

Since the beginning, all Giddings youths received academic instruction appropriate to their needs. Every year, many students earn their diplomas or GEDs.

Working with the youths wasn’t always easy, but it is rewarding when the work pays off, said Lewis, an Investigator Hearing Specialist. “Years ago, we had more gang-related kids. But we worked with them, and they took pride in learning and trying to change.”

As a way of teaching discipline through teamwork, the program at Giddings State School has included extracurricular sports, fielding track, basketball, and football teams. Former longtime Coach Sandy Brown and others with TYC helped the teams join the Texas Association of Private and Parochial Schools (TAPPS) league so they could play outside schools.

Giddings State School teams throughout the years have been to regional playoffs and even state-level competitions. The boys’ track and field team won a TAPPS state championship in 1996, 1997, and 2001 and the football teams made it to the playoffs in 2001 and 2018. In that latter playoff, Giddings lost a hard-fought battle (44-32) against their state school rivals, the Gainesville Tornadoes. 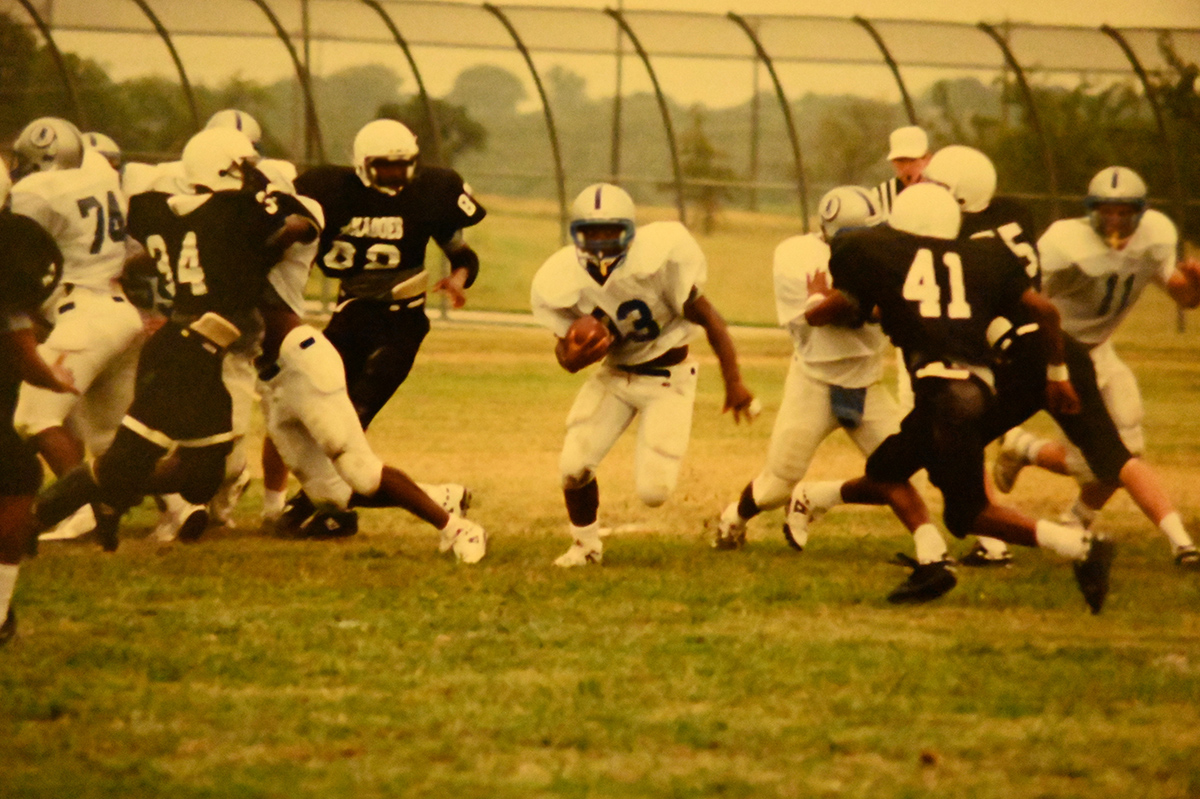 Beyond sportsmanship, the players learned to trust each other and their coaches and teachers, a powerful ingredient in their reform journey, according to Brown, who worked at Giddings State School for 40 years.

Current and former members of the Giddings staff also note the invaluable contributions made by volunteers and mentors over the years. TJJD mentors make a significant impact by also developing a trusting, supportive relationship in which the youth is encouraged to reach his/her potential, discover strengths, and develop self-confidence.

Just this past summer, a huge group of faith-based volunteers held the 35th Epiphany gathering at Giddings State School, demonstrating their strong, ongoing commitment to providing guidance to the youth. Their buoyant return, after a necessary hiatus during the COVID pandemic, raised spirits.

COVID had hit the campus hard, said Kathryn Hallmark, a psychologist at Giddings State School. “Our kids, staff, and all of our families and communities were suffering in so many ways during COVID crisis,” especially during the height of the pandemic when the more dangerous variants caused illnesses and played havoc with scheduling, she said.

But the campus is emerging from that period, she said. “The core of the Giddings campus is strong. Our community volunteers have returned to support us, and the treatment staff is modernizing and getting all sorts of valuable training.”

Giddings State School is home to a special therapy program for capital and violent offenders and also now serves as the primary center for mental health treatment at TJJD with a Crisis Stabilization Unit and a robust group of clinicians trained to help youth with a variety of needs. 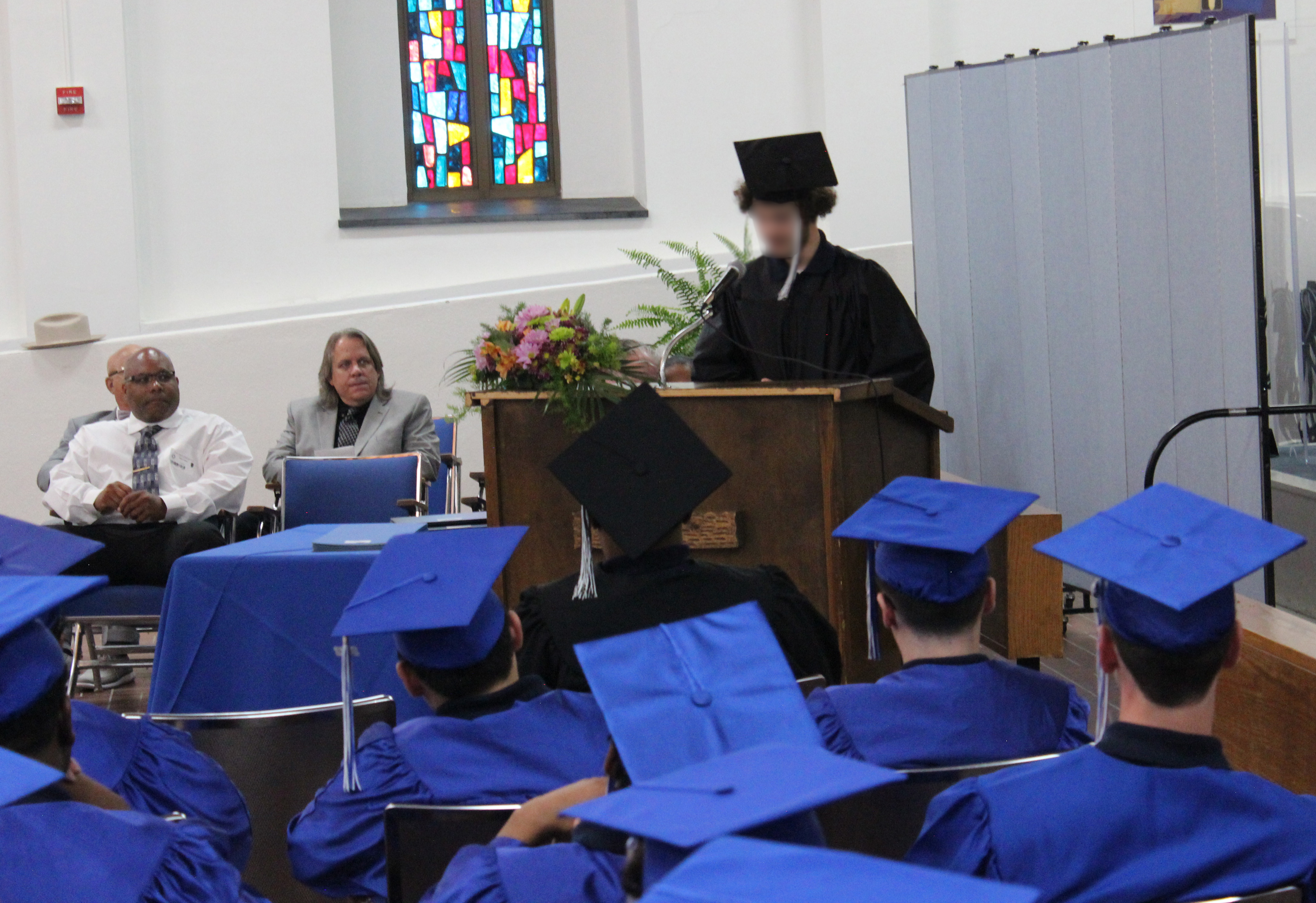 “I have developed so much as a psychologist in my 20 years at TJJD,” Hallmark said. “I look forward to what blessings may come to the Giddings campus.”

The Giddings campus also has been training dozens of new Juvenile Correctional Officers (JCOs), following a staffing shortfall during COVID which TJJD leadership and the Texas Legislature are addressing with pay raises for direct care staff that went into effect in July.

“Our recruiting efforts are increasing and we’re getting about 20 people a month trained, starting in August. What that will equate to is we’ll get back to full regular programming on a regular basis,” said Superintendent Bill Parks.

And soon, more change. “We’re actually retraining the entire campus on structured felt safety and that will provide the youth a feeling of safety,” Parks said. “It’s like we’re going back to the basics, re-teaching and re-framing it, and I feel good about it. Once that’s done, we’ll have a great facility going forward.”

Fifty years. So many changes. So much that remains the same. The challenging and important work at Giddings State School goes on, thanks to so many devoted people.

(If you are planning on attending the luncheon at 11:30 am, Oct. 18, at the campus chapel, please send your RSVP to Janet Sheelar () by Oct. 14. Guests will enjoy a hot lunch and listen to a speaker with a special story.)