Glen Knipstein is having a winning month.

Last weekend, a cousin invited him to the UT game against UT-San Antonio. The weather was sunny, the crowd roared, and the Longhorns won. Light up the tower!

It was a rust orange moment to savor for the home crowd and Knipstein, who got both his bachelor’s and master’s degrees at UT-Austin.

A few days before that, Knipstein enjoyed another star moment when he picked up his certificate marking 35 years as an employee of the state of Texas.

He served the first 29 years at the Texas Department of Transportation, where he retired as Director of Accounting. The next six years came after he launched a second career in 2016 at TJJD, where he’s now the Director of Fiscal Affairs and Budget.

“The work that TJJD does is very important and helps TJJD youth increase their chances of success in life.  So, I feel very lucky and happy to be working with the great professionals at TJJD, and I plan to work another year or two before I retire,” Knipstein said.

He is grateful to Emily Anderson, TJJD’s Deputy Executive Director – Finance and Operations, for hiring and promoting him. 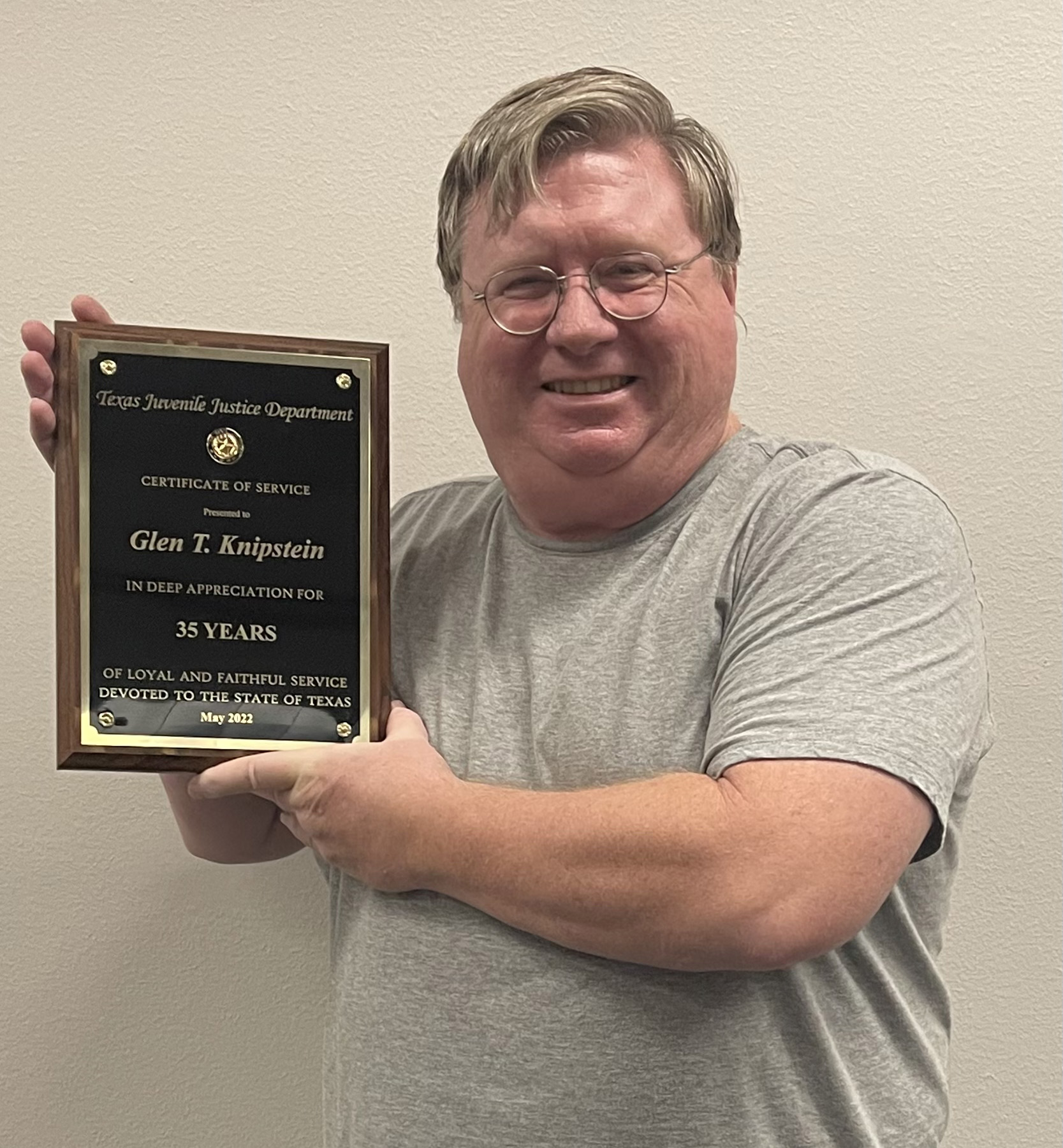 “I have worked with Glen for almost 18 years,” said Anderson, “and he is one of the most knowledgeable government accountants I have ever worked with. He has been instrumental to the continued success of TJJDs Finance Division.” Before TJJD, Anderson and Knipstein previously worked together at Texas DOT.

Knipstein acknowledges that the people in his department do not work directly with the youth. However, the finance department provides important support.

“We work to make sure the bills get paid,” he said. “My area does all the payroll payments – making sure they (employees) get their paycheck so those working at facilities can focus on the youth and their own families.”

Knipstein knows how important it is to have time for family. His break in state service came when he left DOT earlier than he’d planned to take care of his aging father. It was something he’s glad he did.

After his father’s passing, he was gratified to put his expertise back to work for TJJD. He started as a temporary worker, helping with a specialized annual finance report, but then applied and was selected for fulltime work commensurate with his experience.

In addition to following his alma mater’s sports teams, Knipstein enjoys coin collecting in his spare time. He has fond memories of his boyhood when he, his sister and their father would comb through bags of pennies from the bank to see which ones had “wheat ears” – two shafts of wheat embossed on the back -- and rare mint markings from the early 20th Century.

The pennies, he said, are not very valuable, but it was fun to find those that were not in great circulation.

He’s also proud to have served in the Army Reserves from 1983 to 1998. Knipstein was called to active duty during the first Gulf War and served as a Captain in the U.S. Army Finance Corp at Fort Hood.

He enjoys work at TJJD because “everybody works together and supports each other. They’ve definitely contributed to my success.”