Looking back and reminiscing over 35 years of life is quite a task, let alone working those 35 years and more within two state agencies. Tina Saenz, Administrative Assistant to the Superintendent at the Evins Regional Juvenile Center in Edinburg, accomplished this and is still going strong. She has worked at TJJD/TYC for 33 years. 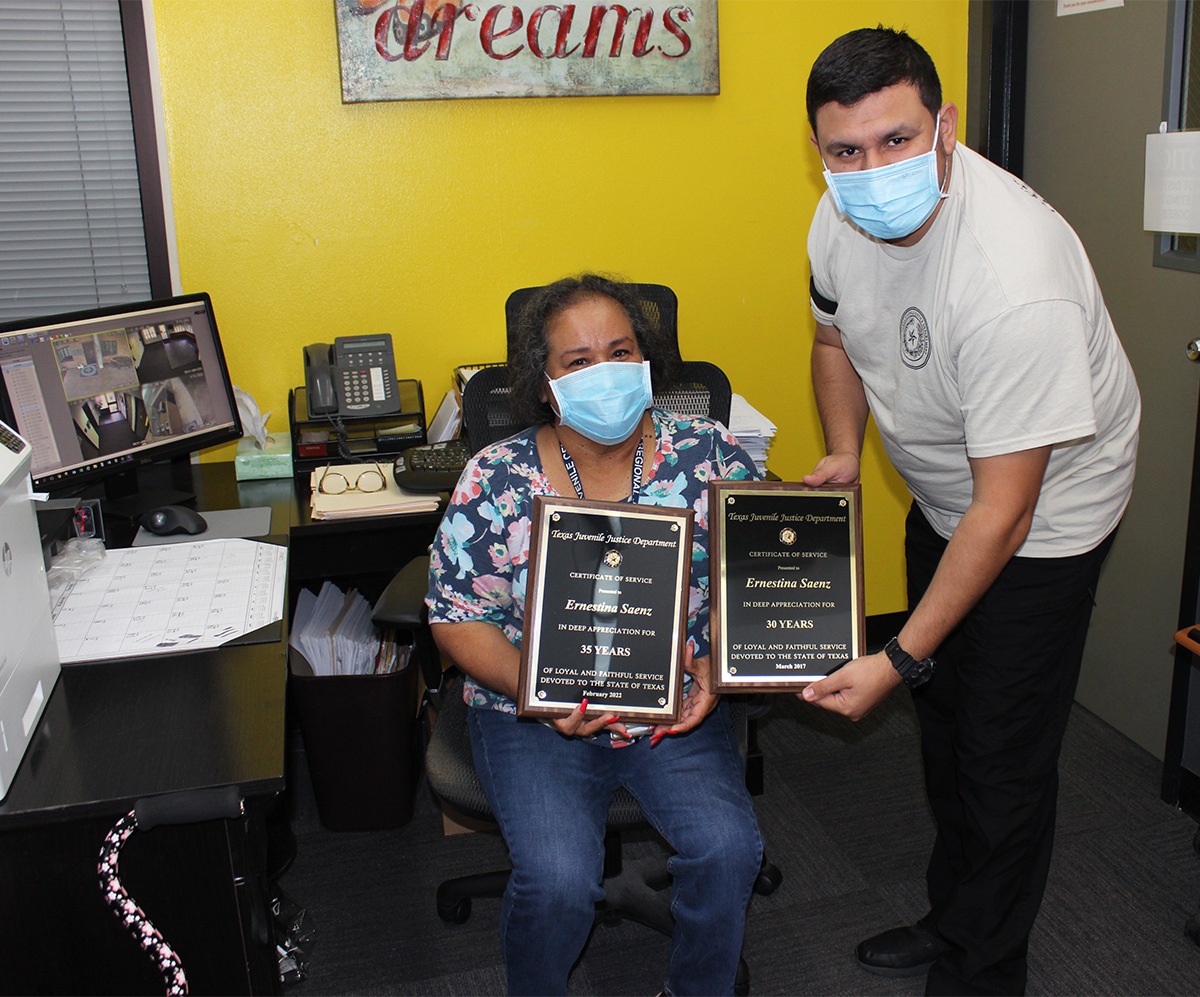 Saenz began working as a clerk with the Rio Grande State Center in Harlingen, Texas back in 1986, but she wasn’t enjoying her duties there.

“I had a friend who worked at Tamayo House and she advised me of an opening for a clerk with TYC, so I applied. I got the job and started on May 5, 1989. In June, I found out that Tamayo House would be closing, and a halfway house would be built in Houston.  Staff were transferred over to Evins and I was placed as the first clerk for the education department. We had one clerk and two teachers,” Saenz said. (Tamayo House later reopened and remains open today.)

After a short stint at Evins, she was transferred to Beto House in McAllen, also a part of TYC back then. During a restraint with a youth she was injured, and after being medically cleared by her doctor, she returned to work and was re-assigned to Evins. This time, she was a Youth Activities Supervisor (YAS), then a Juvenile Correctional Officer (JCO), and then a clerk for case management and finally, moved to her current role as an Administrative Assistant to the Superintendent. Today, that Superintendent is Eduardo Garza.

She also works closely with Asst. Supt. Emmanuel Ortiz, who said Saenz has shown her commitment throughout the years, as she's been appointed to different positions.

"Her dedication is unparalleled," he said. "Ms. Tina, we are lucky to have you."

When Ms. Saenz first walked onto the Evins campus, there was no landscaping yet. The new buildings were in the final stages of construction and being turned over to the state. In August of 1990 the first group of youth arrived and were housed in what is now called Dorm One.

That’s a memory from the very early days at Evins. As the years rolled by, there were many more and for Ms. Saenz that’s been part of the charm of working at Evins and being a part of helping young people turn their lives around.

“Many times, I have been at Barnes & Noble, HEB or other places and I hear my name called out. Former residents come up to me and ask me if I am still at Evins, because they were here at one time before and remember me and other employees.”

We may not always agree on things, but we are there for each other

“To be honest, these 35 years have gone by so fast. I think back to where we started and where we are now.  As a campus we have gone through so much, but when times are hard, staff always come together. We may not always agree on things, but we are there for each other when needed,” she said.

The teamwork and camaraderie are the greatest strength of the campus, she said.

Working at TJJD is not for everyone, she noted, and her words of advice for new staff are this: “This is a very difficult job, but it does have its rewards. You may not think so, but when you see these youths out in the community, and they are productive citizens, you realize that they were listening to us,” she said.

“Many times, they will thank you for being there for them and not giving up as many (others) out there in their lives have.”

Thirty-five years sounds like a long time, but for Ms. Saenz who is still employed at Evins, it seems like it was just yesterday.

And while she enjoys her work, she also values her free time. She enjoys watching classical and animated movies and reading romance novels.

She knows that one day she will retire, as many other have with whom she’s been privileged to work. But for now, her work, her passion, continues and she keeps building beautiful memories.