The Texas Juvenile Justice Department is always working to recruit new staff for our secure campuses and halfway houses, and the best way to hire driven and dedicated people is to have someone driven and dedicated to seeking them out. There might not be a better example of that kind of person than TJJD’s Jim Espinoza. 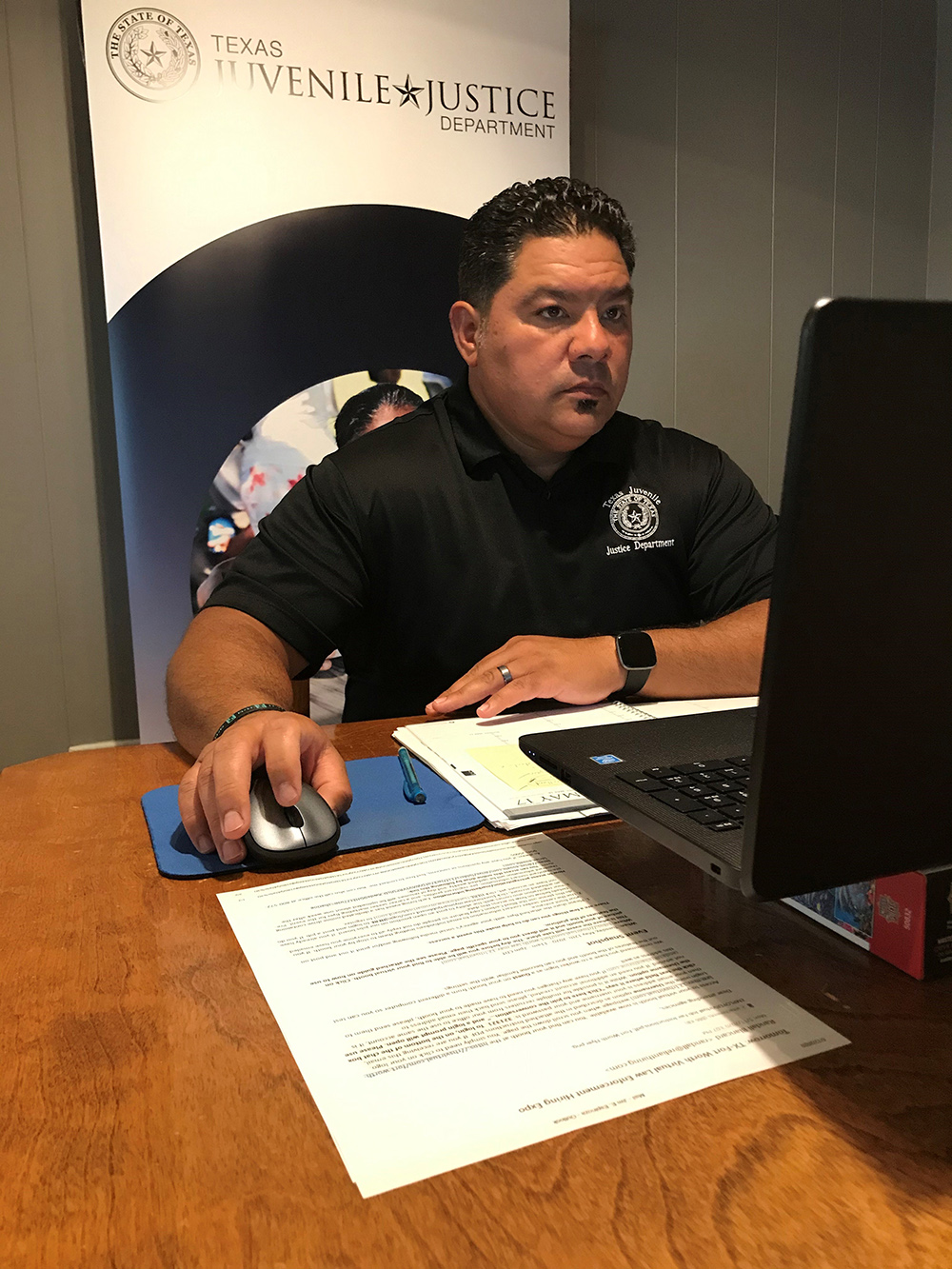 Espinoza, who's worked at TJJD since 2003 when he started as a case manager at Ron Jackson State Juvenile Correctional Complex, in Brownwood, became a recruiter in 2019. This month, he was named the agency’s Manager of Recruitment and Retention, a role in which he’ll work with all campuses as they strive to find the very best staff for the diverse career roles at TJJD.

Sit down with Espinoza for a few minutes and he’ll tell you right away how much his work as a recruiter has meant to him.

“I’m a people person. I’m comfortable with people. There’s a joy for me, as a recruiter, to help open up doors for career opportunities. There’s a gentleman who started with us as a coach, became a case manager, and now he’s our Operations Manager at Ron Jackson,” said Espinoza, a Brownwood native who earned his degree in Social Work from Texas Tech University, in Lubbock.

One of his favorite parts of the job is working alongside TJJD’s other recruiters, from various campuses, at recruiting events and job fairs held across Texas.

“I love being able to hold big, hiring events and bring people on. Our state benefits are amazing and the person or people we bring on will be doing something possibly on the level of a schoolteacher where they’ll make an impact on a kid’s life. They’re going to make a difference, and these kids need our help.”

Espinoza’s always mindful of the importance of his job and how much it matters that he finds dedicated people to work in TJJD facilities, where the direct-care jobs require employees who have special heart and patience for working with young people.

“Recruiting is how you build departments. I want as big and as strong a team as we can have, because we’re trying to get these kids back on track.”

In his own department of Human Resources at TJJD, Jim is much appreciated, said Lea Ann Johnson, a fellow TJJD recruiter based at the McLennan County State Juvenile Correctional Facility.

“Jim is always willing to pitch in to get our candidates assessed and hired,” she said, and he understands what appeals to job candidates for direct-care positions at the agency.

The majority of TJJD job seekers interviewing, she said, “are excited to become role models to our youth and share their wisdom and knowledge to help the youth succeed in the future and make better choices.”

TJJD salaries have gone up, and jobs also offer a chance to make a difference for young people

Recruiters do have one new powerful tool: TJJD announced a 15 percent pay raise for direct-care staff earlier this July. That pay raise brings starting pay for a Juvenile Correctional Officer (JCO) to $41.7K a year. Case managers, cafeteria staff, parole officers and other positions also are getting the 15 percent pay bump.

In addition to the improved pay, Espinoza believes that TJJD jobs offer career satisfaction that rises above so many other jobs. He stays optimistic that when the right people see what a career at TJJD can bring to their lives they’ll have a hard time wanting to look elsewhere.

“People are kind of blown away when they sit down and talk to us about a job because they usually don’t realize the teaching opportunity. I tell people when they come on board that the measuring stick we use is when you see progress in a youth’s life. That’s going to bring you joy. You’ll see the difference (in the youth). When you walk on the campus, when you walk onto the dorm and you see some of these kids light up to see you, that means you’re doing something right. That’s a great feeling,” Espinoza said.

He concedes that the pandemic and current national hiring crisis have presented challenges to recruiters and have him working harder to find fresh ideas.

“It’s just a tough time, hiring people right now. We ask ourselves ‘What can we do differently to recruit?’ We’re trying to recruit people who want to be here. We want people who have a desire to help these kids. We don’t want someone who’s just coming for a job. That’s not what we’re trying to do.”

Espinoza puts great care and energy into finding the right jobs for the people who want to come on board.

“When we promote a job fair, we’re inviting people to come make a difference in a youth’s life. Our Juvenile Correctional Officers maintain safety and accountability, but being a positive role model, being a mentor, is key. A JCO wears a polo shirt and khakis and that alone makes them more approachable to most of these kids. A youth in one of our facilities sees them, a therapist, or a teacher and we’re all dressed the same.”

The job is critical to a youth’s future and to assuring community safety. A good Youth Development Coach may just be the person who helps turn a life around and save a young person committed to TJJD from falling deeper into the justice system.

If helping somebody brings you joy, you may just find you’re in the right place at TJJD, he said.

“I’ll see people (he recruited) two or three years along into their jobs, maybe someone will wave to me in the parking lot at Ron Jackson or in the grocery store, and they’re happy.”