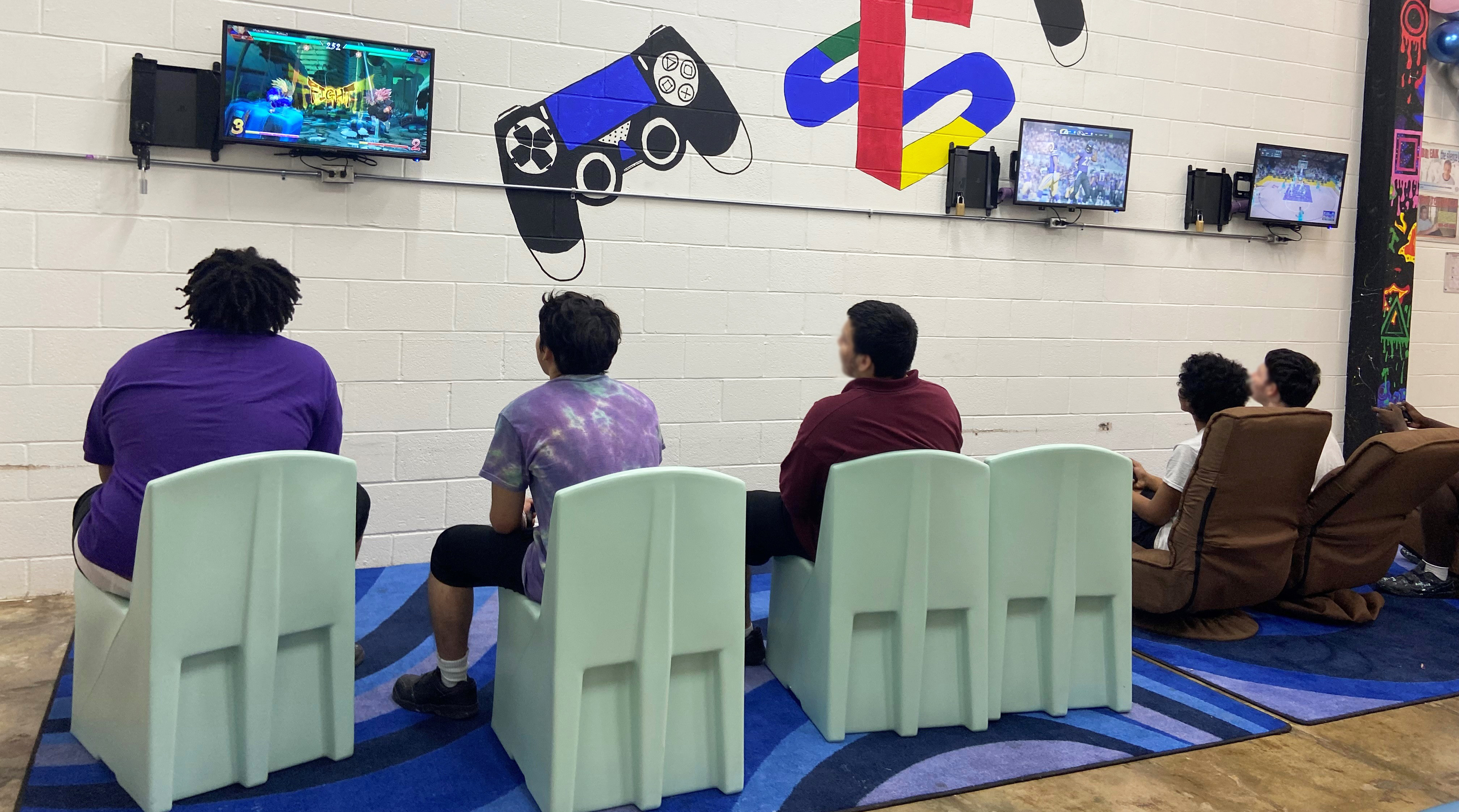 Giddings State School has a long, strong tradition of offering athletic programs and academic and vocational classes for its youth, providing a well-rounded high school experience.

But what about after-school hours?

Now, with the opening of its new recreation center, Mustang Alley, Giddings State School has that covered too. The center is packed with all the games you’d find in an arcade, and then some.

There’s an air hockey table, shuffleboard, ping pong, foosball, a pool table, basketball arcade and electronic games, such as Pac Man and Rampage, and three PlayStation gaming centers with chairs. There’s also a large screen HD TV for watching sporting events. How could there not be? This “youth cave” has got it all. (Or will have it all, by the time the flooring is finished in the weeks to come.)

You can imagine the teens’ surprise and delight when Mustang Alley had its grand opening last week. They were thrilled. They rambled around the airy room, jumped right into the miniature basketball, ping pong and arcade games. All the dorms got to visit, in turn, and enjoyed snacks of chili dogs, cake and ice cream to celebrate the grand opening.

“This is a chance for the kids to be normal and have fun,” said Robin Motley, a campus manager. “And it allows staff to be playfully engaged with the kids, building a positive rapport between staff and youth.” 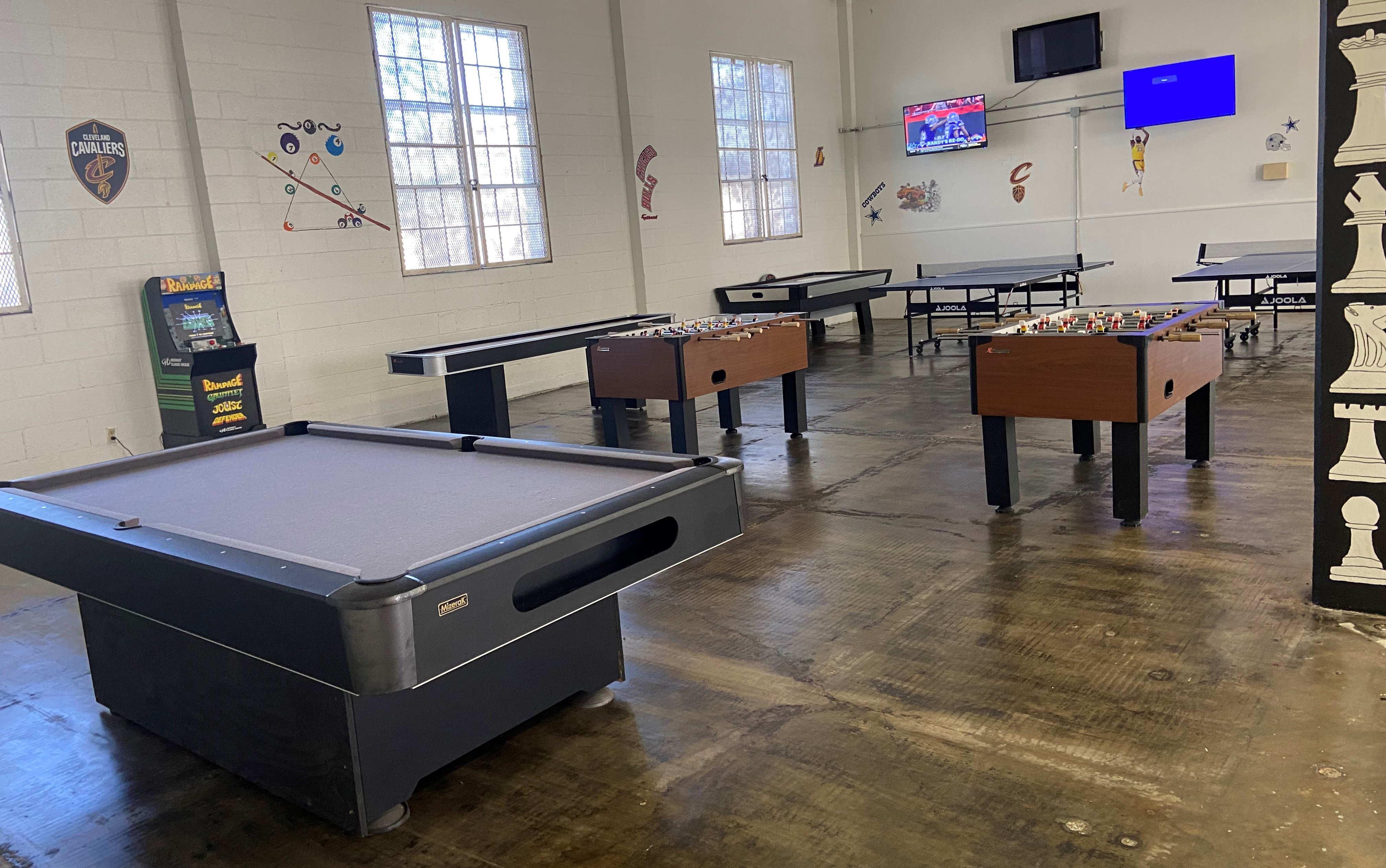 Playful engagement is a key tenet of TJJD’s Texas Model, the umbrella program that guides all activities and interactions with youth. The Texas Model advocates a trauma-informed approach that emphasizes positive human connections and strategies that reduce conflict.

Mustang Alley, situated adjacent to the Sandy Brown Gymnasium, has been decorated playfully, too, with sports figures and game motifs painted on the walls, mainly by Giddings’ students.

Of course, all the activity at Mustang Alley will make the kids hungry and thirsty. And that’s not been overlooked. There are hot dog, popcorn, and snow cone machines standing by.

Campus recreation staff took the lead in envisioning the center and its features. They selected and requested the sport tables, game consoles and supplies, and designed the layout.

Rec staff will oversee Mustang Alley long term, and the entire team worked extra hard to get the facility ready for its opening this spring, Motley said.

Now, it will be up to the youth at Giddings State School to work a bit harder on their own game plan – to earn the privilege to visit Mustang Alley as often as possible. 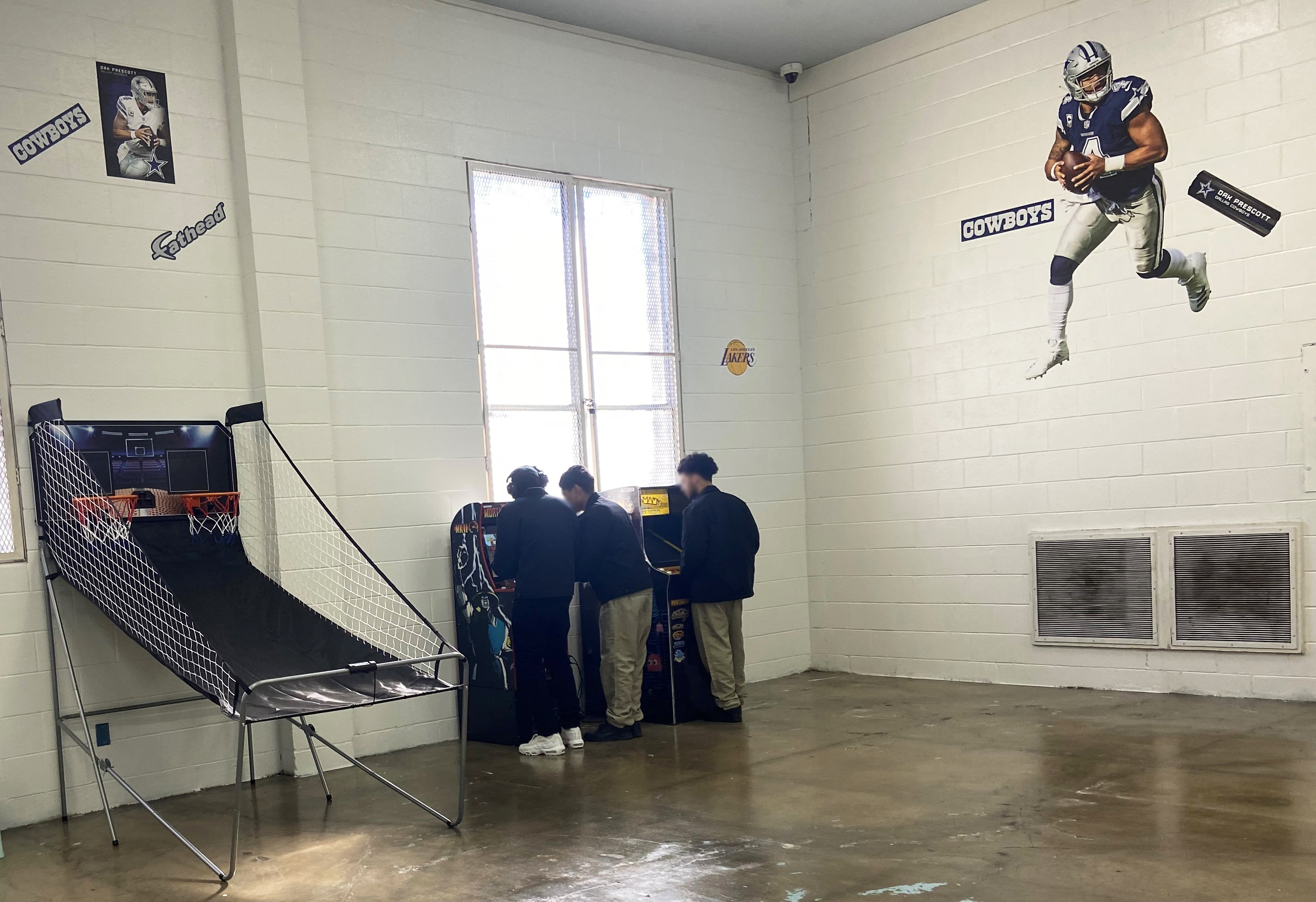 All youth will get to visit the center bimonthly, to get some needed R&R. But Mustang Alley also will operate as an incentive program, with rec staff granting more frequent visits to campus teens who meet certain requirements.

If the opening is any indication, the young men will want to return early and often.

Their first “incentive” task, which launched this week, is simple. The young men must follow the guidelines for moving about the campus, and if they do, they and their dorm mates will earn additional allotted time at Mustang Alley.

Staff will watch to make sure that, as the young men move across campus, they are walking in pairs, meet the dress code (shoes tied, pants pulled up and dressed according to their “stage” or level) and that none are talking disrespectfully.

This incentive exercise will help the teens practice good habits and behavior that will serve them in any setting.

“It falls under the categories of structure, respect and appearance,” Motley said. “These are all skills they’ll need when they enter the workforce. They will need to learn to create their own routines, so they’re at work on time and dress appropriately and use respectful language.”