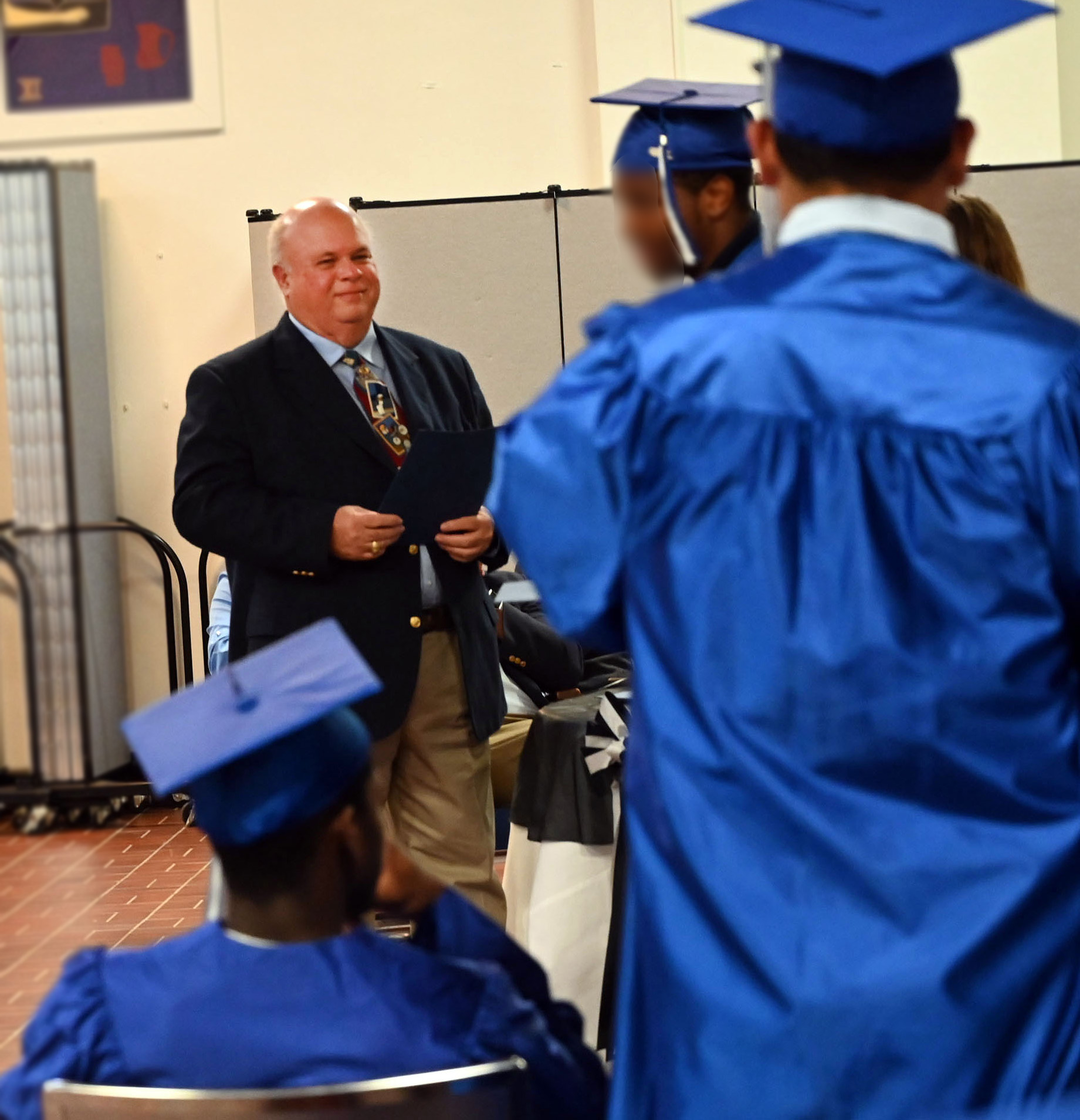 Smith, who worked as a math teacher before becoming an administrator in Central Texas public schools, said his work at Giddings’ LSHS has been enormously rewarding because the school helps kids overcome challenges and reach for opportunities they hadn’t realized could be theirs. This came home to him the first year he served at Giddings, in 1997.

“The highlight of my career at TJJD was our first graduation. . . and all our graduations,” he said.

“They’re always so special, but what was special to me, was how meaningful they were for some of the families. At public school, everyone is expected to graduate, but here, it’s a big deal. Some of these kids they’re the first in their family to get a GED or diploma,” Smith said.

The school traditionally holds a full, gowned graduation ceremony in the campus chapel with music and a guest speaker, attended by students’ families and teachers. Students process in and are called to receive their diploma or GED or vocational certificate. The school, like all high schools at TJJD, offers a full certified high school diploma and several vocational classes, such as auto repair, welding and occupational safety or horticulture.

“With everything going against these kids, the ones that get their GED or diploma or vocational certificate, they’re far and away better off,” Smith said. It improves their odds of success and “it’s just inspiring,” he said.

Smith was known as a thoughtful, unflappable leader, who was frequently seen greeting youth and staff in the halls and attending events, like football or basketball games. He advocated for the school to have a full plate of resources, from the library to the welding shop.

Smith was proactive, always looked ahead to head off issues and treated his staff like family, said Assistant Principal Robert E. French. He was “never too busy to take care of visiting with them in a laidback manner and give full attention to their concerns and needs whether it be professional or personal.”

“As a result, staff did their very best to do a good job and help students, especially those who are most challenging,” French said. “I think this is the secret to the success of his leadership which has been so effective over the years at Giddings.”

French, who counts Smith as a close friend as well as a colleague, said the two would visit at the end of each day to take stock of successes and areas that needed improvement, long or short term.

“I have depended on him my entire time as superintendent. His experience in his job has been very valuable to me,” Taliaferro said. As the longest serving principal at TJJD schools, “Dennis has provided mentorship to the newly hired principals. He will be missed.”

Smith said he will greatly miss his daily interactions with the youth and a teaching staff for which he has tremendous respect.

”Our teachers have a special, special gift for what they do. Interacting with them is sometimes very humbling, because of what they do every day,” he said.

His advice to teachers, particularly in a more challenging setting, such as TJJD classrooms where students are often dealing with past traumas and trying to catch up to grade level: “Patience is a virtue and don’t take anything that happens personally.”

That doesn’t mean to not hold students accountable, he added, just understand that what they might be saying or acting out isn’t really directed at you.

Smith’s own family includes two grown children, a daughter in Austin and a son in San Antonio, one grandchild, and Smith’s fiancé, Debra Koslan.

He is planning a busy retirement, starting with overseeing a new house that he and Koslan are having built in a coastal community near Rockport. There Smith plans to enjoy his hobbies of fishing, cooking, barbecuing and woodworking.

Smith’s education career spans 40 years. He started out as a math teacher at Allen Military Academy in Bryan in 1981, and later taught or served as a principal or assistant principal in Temple, Smithville and Hillsboro public schools. He joined the then-Texas Youth Commission in 1997 as a math teacher at the Giddings campus, before moving into administration.

Garry Blasig, a math teacher since 2008 at Giddings State School, will be taking over as principal. Blasig, a native of Giddings, attended UT, Texas A&M and Prairie View A&M, where he received his principal’s certification. He has been in education since 1978, teaching and working in administration in several districts in Central Texas, including the Giddings, Alief and Bastrop ISDs.