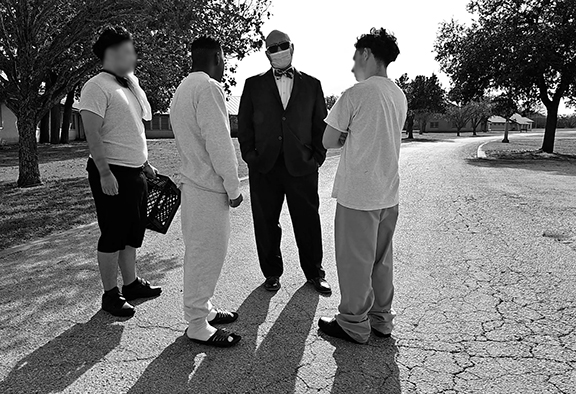 You notice first the Stetson, then the colorful suit, the bow tie and smooth dress shoes. The man so carefully attired is standing in military erectness at the center of a cluster of young people.

The teens are fidgety, earnest, eager. They slump around him in sweats in comical sartorial contrast. He’s paying close attention to what they’re telling him, while nodding at staff who offer a hand or a hello as they pass by.

Giddings State School Superintendent Bill Parks always seems to be in the middle of a swirl of activity. But he’s not caught up in it, so much as he’s grounding it. That cliche, “the calm at the center of the storm,” had him in mind.

He affirms this impression a dozen ways, starting with his answer to “What is the most important quality for a successful correctional officer, or Youth Development Coach, as they’re called at TJJD?”

“If you have that, the things around you, they don’t really knock you off center,” he explained. “You’re able to take them in and absorb them and still be who you are and move forward in a positive direction.”

Inner strength, self-awareness and self-control -- the ability to withstand and analyze events without overreacting to them. These are the qualities that Parks looks for in staff and what he has cultivated in himself since growing up in the turbulent 1960s.

Self-regulation along with his personal trust in God’s guidance has carried him through many life challenges, including some devastating losses. It has led him to where he is today, a master degreed, highly respected juvenile justice leader, who has served as a superintendent at three facilities since joining TJJD in 2012.

A true leader wants to see everyone succeed

“Wow! Bill Parks? Where do I start? I’ve thoroughly enjoyed working under Mr. Bill Parks for the year we worked together. He’s an amazing person to work with,” said Michelle Watkins, a team leader and dorm supervisor at Gainesville State School, which Parks helmed from October 2018 until March 2021, when he transferred to Giddings.

This is the sort of enthusiastic response you get when you ask Parks’ colleagues about him. They describe a gentle, smart, thoughtful leader whom they feel is truly looking for the best in everyone.

“I believe his secret is his listening skills, intelligence, and commitment to understanding. Beyond that, he is a true team player, truly wants to see everyone succeed, and will do whatever he can to aid in that success,” Watkins said.

Growing up in Montgomery, Alabama, Parks witnessed some examples of epic leadership.

In 1955, his great aunt, the civil rights icon Rosa Parks, refused to give up her seat to a white man on the bus, triggering the Bus Boycott of 1955. Other Parks family members joined the movement and Bill’s father, an upholsterer, helped drive people to work during the year-long boycott, which de-segregated the city buses and paved the way for more civil rights actions.

Bill Parks is proud of his great aunt’s legendary place in history. But in the 1950s and ‘60s, the Parks’ family ties presented difficulties, too, in his racially segregated hometown. He remembers moments of great stress, being chased as a young boy by white men in a truck with a rebel flag, being beaten with chains, and another time, huddling at home while the adults planned their defense in the face of a rumored bomb threat from a Ku Klux Klan member.

“I can remember as a child sitting under the table and listening to them talk about the strategy they were going to use if that actually happened. Fortunately, it didn’t, but we had people standing on blocks on guard, waiting . . . shortly after that dad decided to move the family to New Jersey”

Parks excelled in high school in Newark, in academics and several sports. But the move to a large mostly white school in the North was a “culture shock” and some classmates made fun of his Southern drawl.

That’s when he learned to steel himself against outside turmoil and not let others hold him back.

“I had two choices: I could be mean and bitter and stay that way and not progress or I could accept the change and embrace it and make the best of it and I chose to do the latter,” he said.

(Hear Bill Parks’ discuss working with kids (https://youtu.be/aubXSUCVolU) and his early history and life in Alabama in our videos at TJJD's YouTube channel.)

After high school, Parks served eight years in the Air Force, and later worked as a nurse to support his growing family, even as he studied toward his master’s degree in psychology from Auburn University. He taught at the university for nine years and remains a devoted fan of the Tigers.

He worked in juvenile justice in Alabama and then Georgia, serving first as a superintendent and later as head of all treatment facilities in that system, until retiring in 2009. He hadn’t planned a career in juvenile justice but found it to be a perfect fit.

“I never really wanted to work with kids, maybe because of what I’d gone through,” he said. “But when I started working with kids all those experiences that I had really paid off, because now I could connect with the kids. I was able to connect with kids who were incarcerated very easily and that made my career more rewarding.”

A personal tragedy struck in 2010 when his beloved wife of 32 years, Linda, lost a sudden battle with brain cancer.

He fell into a depression. His four grown children tried to help. But they too were grieving. One day, not

wanting to even get out of bed, he experienced a divine intervention. He felt God was telling him to get up, that Bill Parks’ work wasn’t done. He went to the computer and saw jobs posted for TJJD. His children were surprised at his decision to move to Texas, but Parks felt called to again serve young people in need.

In Texas, he worked initially at Central Office, but was quickly tapped to be the superintendent at the McLennan County campus, in Mart. He worked at that campus for six years, before being asked to head up Gainesville State School, and then this year, to oversee Giddings State School.

As TJJD’s longest serving superintendent, Parks has improved each campus he’s served, say TJJD executive leaders. “He is a constant professional even in times of crisis,” deftly bringing individuals and teams together for a common purpose, said Director of Secure Facilities Alan Michel.

“Bill’s willingness to take on new challenges makes him an invaluable asset to the agency,” said Thomas Adamski, Director of the Texas Model.

“He always leads by example and has time for youth and staff. In my tenure as a director, I always found Bill out on his campus visiting with staff and youth,” Adamski said. “He was rarely at his desk, rather, he was always where the kids were.”

In just the right place

The words people use to describe Parks, “authentic” and “genuine,” align perfectly with the TJJD’s focus on creating healthy, meaningful relationships with young people. 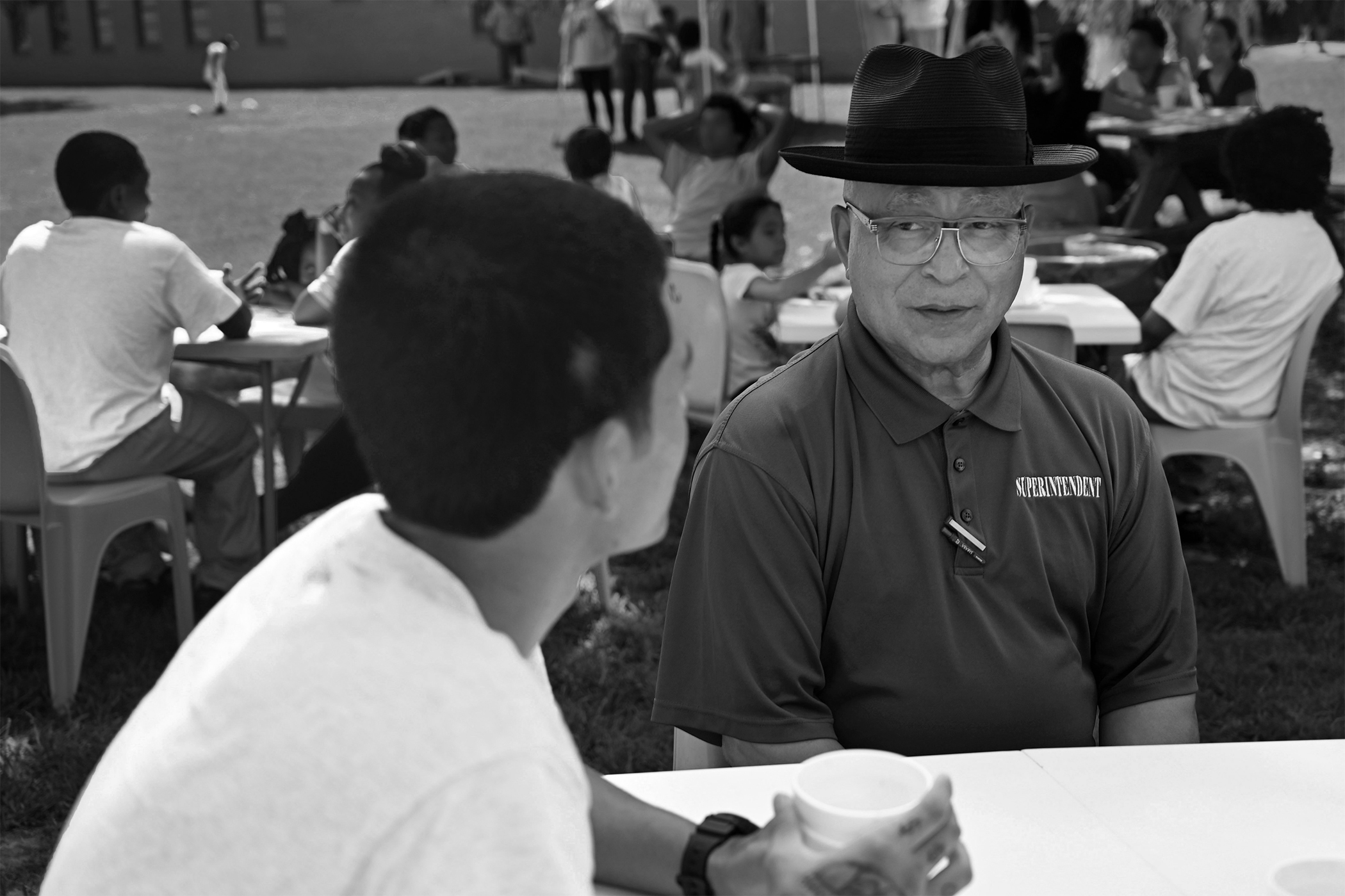 The Texas Model, which guides interactions at TJJD, maintains that building genuine, caring connections with youth in need is the best way, perhaps the only way, to help them make changes. In this regard, it seems, Bill Parks has landed in just the right place.

“With our young people, they can see right through you and know whether you are who you present yourself to be,” said Robin Motley, a manager at Giddings State School who works closely with Parks. “He is true to his word and it is evident that he cares.”

Authenticity is critically important, she said, because youth at TJJD often come from traumatic backgrounds and have difficulty trusting adults.

Parks also puts in the day-to-day work. Tammy Weatherspoon, a dorm supervisor at Gainesville, recalls how he met with each youth as they arrived and learned the names of everyone on campus.

“He genuinely loves kids, and he feels that they truly are the future. He makes them feel like they matter,” Weatherspoon said.

Could it be that the cowboy hat and that delightful suit are more deliberate than we realized? Is modeling success, another facet of Parks showing that he cares?

Watkins thinks so. “He always dresses for success with things like his cowboy hat. This shows the youth to be the best they can be every day, even if they aren’t feeling their best at the time.”

Being an authentic, caring leader also has proven highly effective with staff.

“Working with the youth can be stressful and it can just beat you down. However, he is able to tell you what areas you need to work on as a professional or leader to improve yourself. The way he does this is calming and insightful,” Motley said.

“He has a great way of making sure he has a relationship with every person he works with or that works for him (in his case), said Weatherspoon, who worked with him at Gainesville. “He has a way of making folks feel like they are an important part of the ‘team’. He shows a great deal of concern and he also shares his personal life stories that would make you comfortable to be around him.”

And that brings us to the second most important quality Parks’ identifies as important for staff working with youth: Showing your vulnerability.

You didn’t see that one coming, did you? It might seem counter-intuitive but revealing yourself to others can bring them closer.

Parks offers this example: You are a coach trying to round up a group of teens for “brush up” in the morning. There’s one (if you’re lucky just one!) who doesn’t want to get out of bed. Instead of getting agitated, you recall to them that you also had trouble getting up some mornings as a teenager. You give them a few more minutes, and you maybe also note that as a teenager, you did get up, as your parents wished and found it kept everyone else happy and on time. 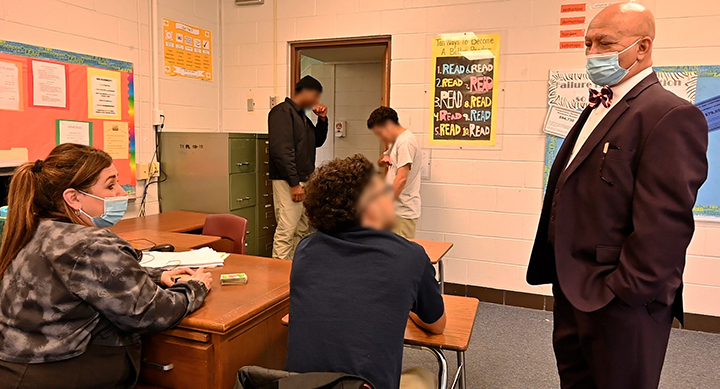 Commiserating with a young person, instead of yelling at them, has kept the exchange on an even keel and shows you care. You have modelled restraint, and as a bonus, there’s less stress on you, Parks explains.

“Don’t be afraid to show people you’re a real person and you feel things too. I don’t mean go around and tell them all of your business, but there’s certain situations you don’t mind sharing with them about yourself,” he said.

“And that makes everyone around you feel a little more connected.”