Getting to your goals: TJJD’s top lawyer on his amazing Grand Canyon adventure, facing adversity and building resilience 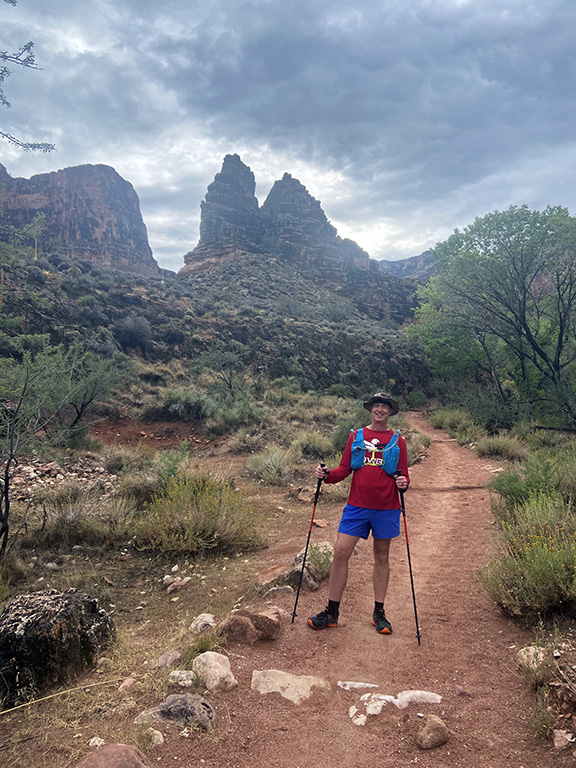 At TJJD, you probably know General Counsel Christian von Wupperfeld as the attentive leader of the legal department and top advisor to the agency’s executives and oversight board.

But von Wupperfeld has another passion that commands his off-duty time. As a US Army and National Guard veteran, he belongs to Team Red White & Blue, an organization that promotes fitness and cameraderie for veterans and any civilians who want to join and support them. Members come from all walks of life and are united in their goal of enriching veterans' lives.

This summer he signed up for a Team RWB challenge to run a virtual obstacle course of an ultra-marathon into and across a portion of the Grand Canyon.

The expedition, one of several adventures offered by Team RWB, “just resonated with me because I like to run. I think I’ve run 22 or 23 marathons,” von Wupperfeld said. “I joke that I do it because I like to eat Tex Mex.”

If you’ve ever been on a fun run, put that image aside right now. The RWB Grand Canyon foray may have been fun under a broad interpretation of that word. But it was foremost a serious, cliffside, physically grueling and heart-pounding undertaking. Too, it was the stuff of sweet memories and personal bests set amid exquisite vistas to which the postcards fail to do justice.

von Wupperfeld’s marathoner team ran, hiked and climbed 33-miles in just one day on Sept. 18, traveling from the rim of the mile-deep canyon to the floor, across several miles to certain landmarks and back out of the canyon that same evening. They covered those miles and 6,266 vertical feet in just 16 hours.

This pre-dawn to dusk marathon over some of the toughest terrain in the lower 48 didn’t just happen. The 15 participants, men and women in their 30s through 60s, most of them veterans, had trained for 10 weeks starting in July. They hiked on rough terrain, worked out to build strength and ran with 30-pound packs and up inclines to prepare for the extreme altitude shifts they’d encounter at the canyon. They met online to support each other. 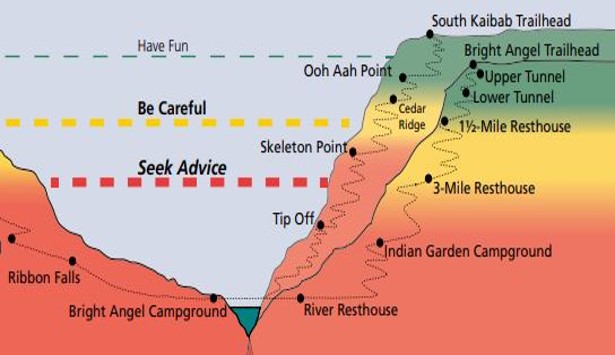 von Wupperfeld, who retired from military duty in 2018 after 35 years of active and reserve service, looked forward all summer to the culminating run in the Grand Canyon. The team aspect, the personal challenge and the rigor all appealed to him. The start time of 4 a.m. was a trifle to a career Infantryman who’d served in Iraq and Afghanistan, and the lure of a new course, a huge draw to a longtime marathoner.

“Running is my meditation time. If I’m having a hard time, it helps me think through it. It’s really hard to be upset about something when you’re out for a run,” said von Wupperfeld, who lives in the Austin area.

Running also serves as a metaphor for life in general, he said. “You’ve got to keep putting one foot in front of the other.”

That’s a philosophy for daily living that might serve TJJD youth, or anyone quite well, and it came to mind immediately for von Wupperfeld when he felt something was not quite right with his right foot as he descended the steep, dark trail into the canyon.

“By about Mile Four my right foot was really starting to bother me, but it was one of those things,” von Wupperfeld said. He told himself, “I have to keep going,”and resolved to stay the course – runnin 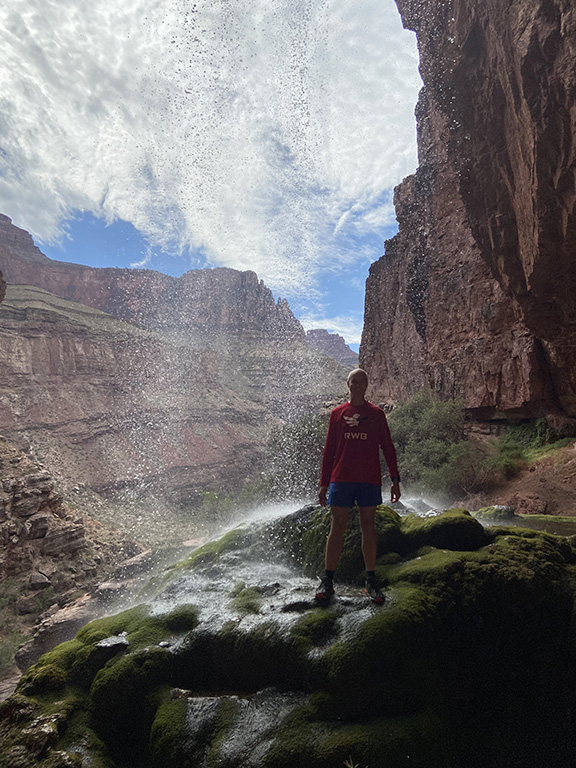 Getting to the falls proved motivating (check out that photo) because he knew this was a rare chance to experience a natural feature few people get to see.

Others on the trip also were feeling the challenge and at times, team members reminded each other to, as Dory says in Finding Nemo, “keep swimming,” Von Wupperfeld recalled.

“A thing I like about marathons, there will always be some adversity, but if you just ‘keep swimming’ you will get to the end,” he said.

“We all face adversity and that includes the kids in our care. By having experiences like this, particularly the ones we share with other people, when challenges arise, we will have people we can reach out to for help,’ he said.

Experiences that challenge us “build resiliency and I think that’s a big part of what we’re doing at TJJD.”

Indeed, the return trip from Ribbon Falls back to the trailhead brought some additional adversity. It rained and turned chilly. Team RWB was tired and some were shivering.

The Park Service understands. They place signs on the trails to remind adventu 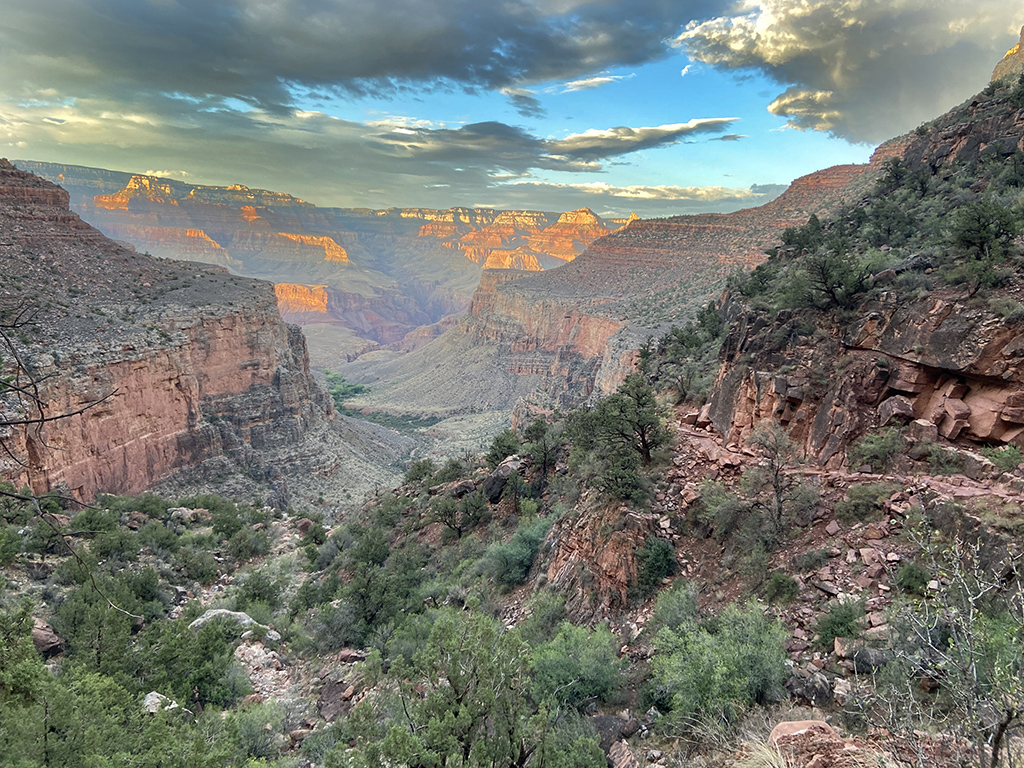 rers that “going in is optional” but “coming out is mandatory.” It cautions adventurers, dozens of whom need Park Service assistance to get out, not to overestimate their skills or stamina.

Team RWB, though, had both skills and stamina. And at this juncture, von Wupperfeld, days from his 57th birthday and hours from a hot shower, knew he must and would push ahead for the big climb back up.

“It was my choice to do that happily or in a disgruntled fashion,” he said. “I think it’s one of the benefits of age that I know if I do it grumpily, it’s going to be exponentially worse. So, let’s just smile and move forward. I smiled, and moved forward and it was fine...and I had a great time.”