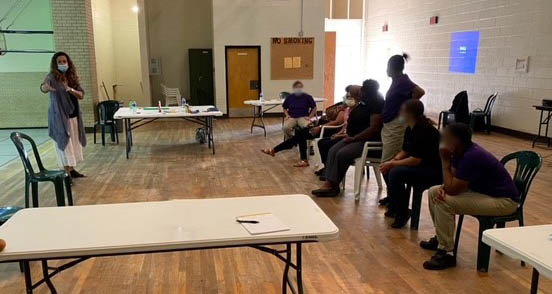 Like every other veteran employee at the Ron Jackson State Juvenile Correctional Complex, in Brownwood, Daniel Nix must have walked past the stage in the campus gym a thousand times.

The brick-bordered proscenium facing the basketball courts sported not one detail that left an impression. The nook was used sometimes to serve snacks after sports events, but it was usually dark and deserted, the place no one notices anymore.

Then one day, Nix stopped -- and took note. He envisioned the stage festooned with curtains; a marquee declaring it to be a special place, say the “Rising Stars Theater.” He heard the beats of band ensembles and graduation speeches booming off the gymnasium walls.

In his mind, the stage would host rousing performances and nestle precious high school memories.

Nix, the assistant superintendent of RJSJCC, vowed to breathe life into this forgotten corner of campus, and this fall, that’s happening.

New black curtains have been hung and a troupe of lively young women, the pioneering members of Ron Jackson’s inaugural improv club, burst onto the stage every Tuesday night.

The five teens practice the art of improv under a program developed by Mary DiMichele, a nationally known improv educator who helps organizations operate at the intersection of improv and trauma-informed care. Deputy Executive Director for State Services Shandra Carter had suggested that Nix engage DiMichele to introduce improv to Ron Jackson.

DiMichele kicked off the program with a day-long workshop on Sept. 17 teaching a style of improvisation she calls “Yes, and” because responses require that locution. A person says something, and another person adds to it, replying with “Yes, and.” After the in-person workshop, DiMichele gave the Ron Jackson group access to a packet of improv games to carry them forward through a dozen more gatherings on their own. 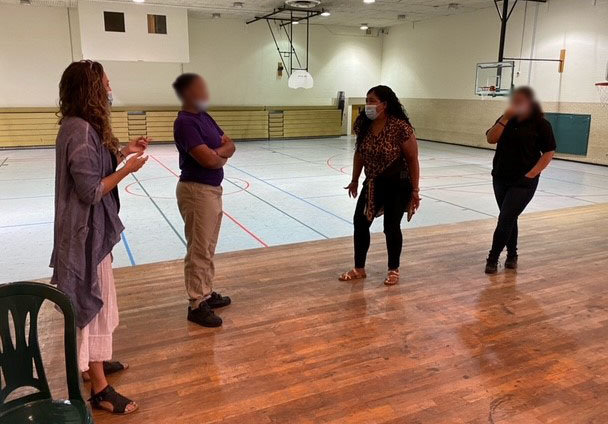 The girls, excited but nervous at first, had a blast.

“I had quite a bit of fun with Ms. DiMichele,” mused S.L., an 18-year-old who lives in the Success dorm. “She was very open and she wasn’t judgmental all. We all got together and had a good laugh.”

Other girls participating echoed her assessment, remarking that they never tired of the exercises during the full day workshop and never felt “judged” because their responses and improv efforts were all considered valid and worthy.

“I learned that I can do anything that feels right to me and that nobody is judging me for who I am. Nobody is saying, ‘That was horrible,’ or that they don’t like how I’m doing it,” said Z. J. of Pride dorm. “I felt uplifted.”

Affirmation is the heart of DiMichele’s improv approach and the girls definitely felt the acceptance.

“You can take it in different directions...and sit or be active,” said C.E., a Courage dorm resident and self-described introvert who typically prefers pets to people. Surprisingly, she said, she felt thoroughly engaged by the improvisations and didn’t weary of the social aspect but had “fun throughout the whole thing.”

By their very nature, the improv games seem ready made to fit with TJJD’s Texas Model approach to activities. Both emphasize building connections, teamwork and empowering the youth.

“Improv teaches them how to change, how to trust and how to deal with others coming into a scene and introducing something they may not agree with,” Nix said.

Watching the workshop was “mind blowing,” he said, because the girls stayed so fully engaged throughout, which is not a given among youth who’ve been through so much trauma in life.

The girls had to sustain a lot of eye contact and pay close attention to others, which can be difficult for kids from hard backgrounds. But the improv framework seemed to dislodge defenses and enable extended interactions, he said.

A couple caveats: Improv may not be what you think, and this was something DiMichele explained in the workshop. It’s not a standup comedy routine, though it shares aspects with that type of agile performance.

Improvisation is an unscripted back-and- forth dialogue, but it’s not unstructured. People tee off of a topic or scenario and bounce that around with team members following certain guidelines. One exercise might require that responses rhyme, for example. Always, participants must be quick to pivot as the narrative zigzags, creating a somber, silly and sometimes deeply introspective story or vignette.

DiMichele, the founder of One Rule Improv, explains it this way in her blog:

“This frame of “Yes, and…” may seem simple, and it is, but look what is being practiced. In order to “Yes, and,” a person must be present, mindful, aware. She must be self-regulated enough to listen and to be attuned to the other player(s) so she may fully understand their offer. She cannot pre-plan what she is going to say. She cannot be oppositional. She must, in that moment, accept whatever offer is given without judgement, comment or question. She then adds her own offer, building off the preceding one...”

And this is how S.L. experienced it: “I felt as though it was more personal. The drama is coming from you, you’re speaking. I never would have thought that improv had so much to it. You see improv in movies and you think it’s like a stand-up show, and there’re no rules to it, but there’s actually a lot of structure to it.” 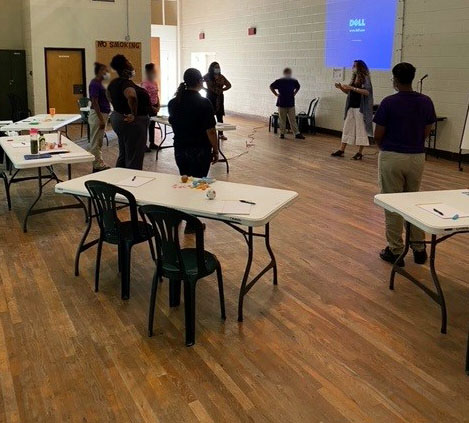 Improv, in other words, is not quite like its breezy reputation. It requires discipline and deep thinking. It’s part acting exercise – think “Barry” -- and part problem-solving, like Dungeons and Dragons, but without the dungeons or dragons.

Importantly, DiMichele’s “Yes, and” brand of improv is firmly affirmative.

Anyone can play and it offers multiple benefits.

“Please note that the point of ‘Yes, and…’ is not to teach one to say yes to everything,” she writes. “It is, instead, an exercise that teaches one to take a moment and seek to understand, to explore. This practice of ‘Yes, and…’ can be transformative.”

The positivity of this type of improv program has a lot to offer the girls at Ron Jackson, says Nix. After observing it in action, he believes the format and small group setting provides the social safety the girls need to show vulnerability and at the same time, feel and extend empathy to others.

For justice-involved girls that can be empowering. It enriches their life experience and teaches how to see from another perspective.

"Our youth know they made some bad choices in the past and that they need to understand what got them into our program,” Nix said. “This will help them think about being more empathetic going forward.”

It also builds self-esteem, and that’s critical for the girls at Ron Jackson, many of whom were abused mentally or physically or sexually as a precursor to their involvement in the justice system, said Monique Mosley, the Texas Model Mentor at the campus.

“If you’ve been abused or sexually abused, it tears your self esteem down,” she said.

None of this is lost on the girls participating. They see the benefit of attuning themselves to others and report that these exercises are helping them feel more assured in how they communicate.

Improv “helps me become more social and know how to process my words,” said S.L. “I’m a person who’s not naturally social. I don’t go up to people and start talking, so being in drama club and improv, it gets your mind rolling and helps out with the social skills.”

The improv team plans to demonstrate all that they’ve learned at a yet-undated performance for staff and youth on campus. That will be a public debut for the pioneering members of the improv club, and for the one neglected stage.

Yes, and . . . Nix says, maybe later, a drama club or music group will perform there.

Yes, and . . . dancing donkeys also will grace the stage.

Yes, and . . . the dancing donkeys will put on aprons and bake cakes for the audience. Hee-haw!