Boys at Tamayo House put some good karma in the bank last week when they put their heads and hands together to help two dogs out of a fix.

“We were in the back 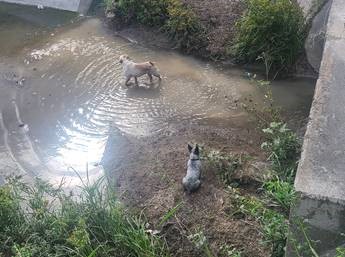 of the house playing basketball, when we all began to hear crying and whimpering from close by,” Coach LeeRoy Diaz recalls. “Behind Tamayo house, we have a drainage canal for stormwater. As a few youth looked over our cedar fence they heard the crying coming from the canal.”

The boys ran back to Diaz, saying they could hear a puppy stuck down below and wanted to investigate.

“As we approached, we saw two stranded pups. As soon as they saw us you could see the pups were happy, as they kept on trying to jump toward us while whimpering,” Diaz said. “We imagined they had been down there for a few days due to them being wet and covered in mud.”

Diaz called the local pet shelter but they were not open yet. Meanwhile, construction workers fixing a road nearby told the group that the dogs had been there for a couple days.

“The day was hot and being stuck down there in concrete, I’m sure the pups were dehydrated and hungry. Our boys immediately wanted to help them out,” Diaz recalled. “We looked around and found an area where we could attempt the rescue."

The group assessed how to safely access the pups and extract them and then went into teamwork mode. "We made sure the youth were safe at all times as they made their way to the dogs," said Tamayo Supt. Eduardo Garza.

Working together the young men were able to lift the frightened canines to safety. 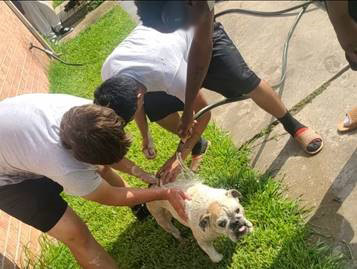 “Ours boys were as joyous as the pups,” Diaz said. “We brought the pups home and the boys bathed and fed them. It turned out that one pup was Blue Heeler, and the other one, a bulldog.”

But wait, the story gets better. 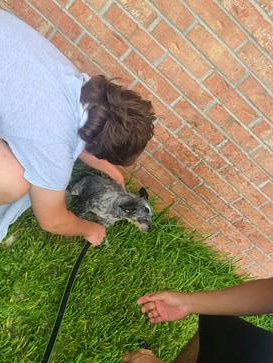 called the pet shelter the next day and the dogs were checked for chips and examined for health programs. Both were deemed healthy, but unfortunately, they were not chipped and no owners had been by looking for them.

Two Tamayo staffers stepped up and each adopted a dog.

Diaz and the young rescuers were thrilled. “These puppies will have good homes. Our youth did a good deed and gave these two pups a second chance.”

“This is what we try instill in our youth, that regardless of one’s past, everybody deserves a second chance with hope for a better life,” Diaz said.

Garza agreed that this exercise in empathy and taking action surely affected the youth: "It is my firm belief that if they can put themselves in another's shoes -- a human or an animal -- it can be healing."