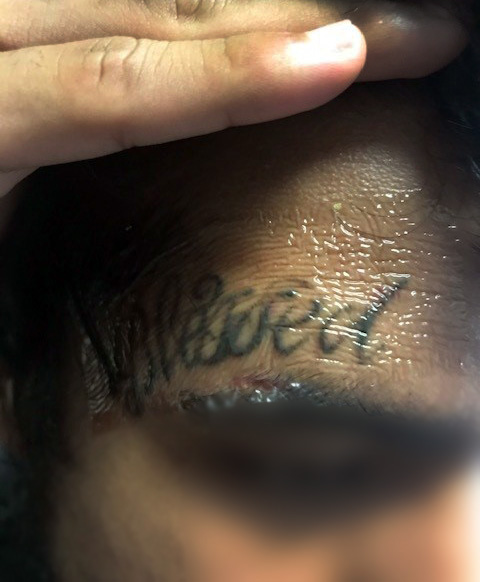 They show up every month for a variety of reasons. Some simply rue the decision they made at age 13 or 14 to permanently ink an image on their face or hands. Others are graduating from high school and getting ready for work or college and want to clear the slate, visually and symbolically.

Still others have renounced their gang affiliation and want to be sure no one is confused about that when they return home or visit their old neighborhood. They want the tattoos that link them to a gang gone, gone, gone.

Not all TJJD youth decide to get rid of their tattoos, of course, but those who do can sign up for an appointment with the free mobile tattoo-removal clinic.

“Often, they just don’t want them anymore,” said Amber Gabler, the Giddings-based technician operating the Tattoo Removal Program. “They’re not thinking with their ‘immature brains’ so much anymore and they’re wanting them off, especially those on the face. Some kids want them all off.”

“Yesterday, I saw a young man who had a huge one across the neck and a bunch on his face and all along the arms. He point blank told me, I want them all off,” to improve his chances of getting a job when he’s ready, Gabler said.

The process will take several hours of work spread out over weeks and months, she explained, because the tattoos are removed with a laser, gently, layer by layer, bit by bit, with a healing period in between each treatment. The total removal will likely comprise four, six or even eight treatments.

J.P. is now partway through the process, having completed two treatments and is starting to see some of his old inkwork fade and blur as it heads for oblivion. The 17-year-old at TJJD’s McLennan County campus near Waco said he has received so many tattoos since he started with the first one at age 13 that he couldn’t even give a number for how many he has overall. Each, though, represented a memory, he said, with some memorializing tragic events and the loss of friends or family members. 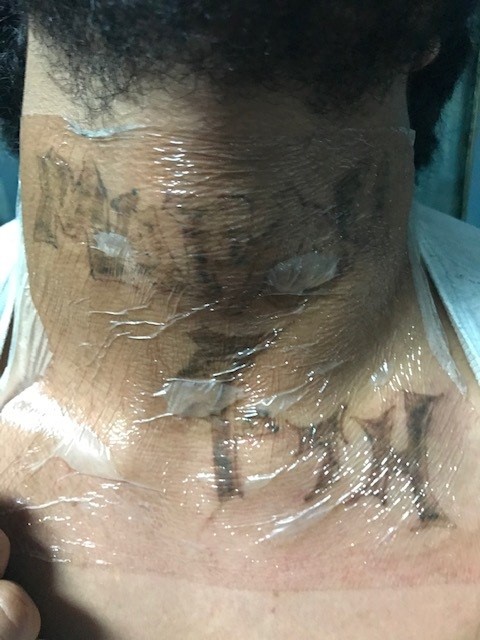 The largest tattoo and the most visible spans the front of J.P.’s neck and spells out the date he lost a friend who was shot to death. That date commemorated both that traumatic loss and also the crime that landed J.P. at TJJD. The events were one and the same.

So while this was a way of honoring his friend, J.P. said he’s realized he can memorialize the young man other ways – ways that don’t taint people’s first impressions of him.

“When people see you and meet you that’s the first thing they look at and they judge you by how you look -- and you have tattoos on your face and neck, they think you’re a criminal,” he said.

“And they don’t get to know me, you know what I’m saying? Get to know a person before you judge them.”

Another negative aspect of tattoos arises when homemade tattoos – often crude etchings produced by kids with sharp tools and ink pens – mark a person as having been gang-affiliated or having a criminal background, even though people may not recognize the specific gang symbols or know the affiliation or meaning of the markings.

These random “tattoos that don’t look that good” can be a real hindrance, said M.M., a youth who recently left Ayres Halfway House and is eagerly seeking work in his home community.

He’s observed that older people, and potential employers, will judge that harshly, he said, which is why he had his face tattoos removed and wishes he’d never even gotten them.

“The ones I got removed were gang-affiliated. I didn’t want to be walking around with that stuff.
Nobody wants to hire anybody with face tattoos and a jail record,” he said, adding that the removal process was painful but “not too bad.”

J.P. sees the removals as important part of the fresh start for himself that he’s planning.

“I don’t want to keep living the way I was living. My family, they’re struggling, my dad went to prison when I was 11 and he was deported later, and my mom got deported this last year,” he said.

J.P. received his high school diploma while at the McLennan facility near Waco and when he heads home later this year, to live with a grandmother, he intends to get a job. After that he plans to go to college, and possibly major in chemistry or biochemistry.

Visible tattoos would only jeopardize his plans, he said. That’s why, in addition to the neck tattoo, those on his hands also are coming off. “I’ve heard you cannot get a lot of jobs if you have tattoos on your hands,” he said.

At the moment, J.P.’s tattoos are covered with a clear, sterile bandage protecting them against infection as they heal from the second lasering. As the numbers and symbols on his hands that tied him to a gang begin to degrade, he’s relieved to be shedding this affiliation. “I’m grateful,” he said. 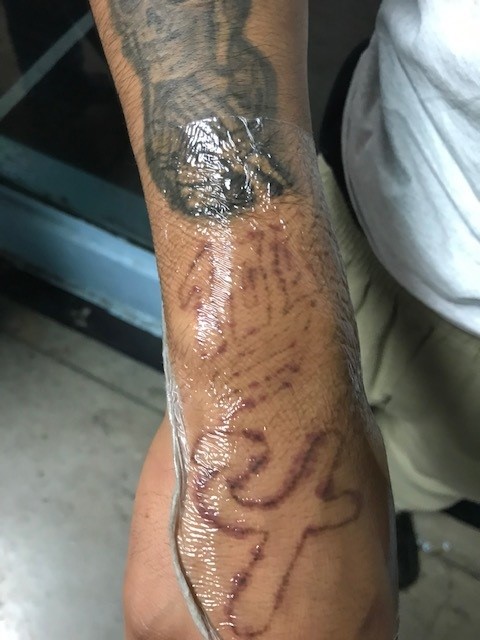 Gabler travels to all five of TJJD’s secure facilities and five halfway houses to treat several youth every month, helping those who want tattoos removed get it done while they’re in residence at TJJD. The youth’s freshened appearance can bring an added dimension to the wholistic transformation TJJD coaches are working to spark. TJJD's young people also receive behavioral therapies and attend school classes as well as daily “nurture” groups. All these activities operate under a trauma informed rubric, called the Texas Model, which emphasizes caring relationships and learning to exercise emotional control.

The tattoo removal process itself can be a learning process in which the youth learn to receive empathetic care and follow-up with self-care under Gabler’s guidance, said TJJD Medical Director Scott LePor. “Amber is exceptional with her skills as a tattoo removal technician as well as incredibly adept at connecting in a healthy way with our youth and establishing a trust-based relationship as they receive these services. Amber not only provides the tattoo removal service, but more importantly, she helps develop life skills with the youth for a more positive life trajectory.”

In this way, the program fits into the Texas Model by offering youth another tool as they deconstruct their past and build a new approach to life. The removals are encouraged, but no one insists. The youth decide if they want the service and they receive medical counseling ahead of the process, which is overseen by TJJD’s Medical Services Directors LePor and Jana Johnson. 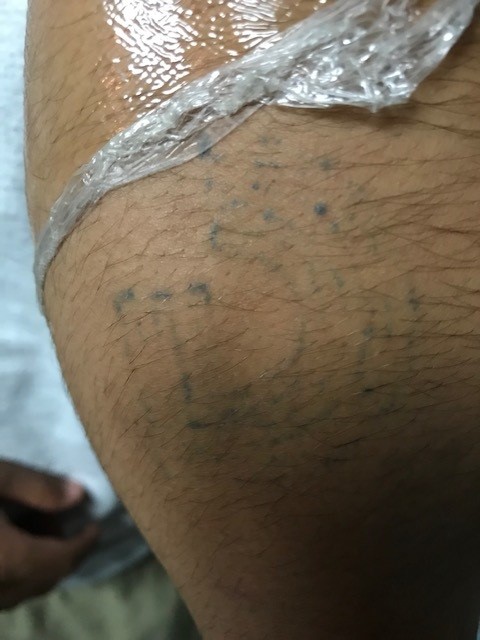 Since its launch in 2016, the free service has treated 484 youths or about 96 kids each year, saving each of them hundreds, if not thousands, of dollars, compared to what it would cost to have tattoo removals done later in a retail setting.

“All of them come in scared,” said Gabler, “but we talk through the process” and get to a “level place,” before the laser process begins.

J.P. went through it like a trooper, as do the vast majority of youth, though the laser skimming over the skin does cause some discomfort, she said.

Generally, the dramatic results quickly put that short term discomfort into perspective. Often, Gabler said, youth will drop by later to thank her.

Gabler recalls a recent client who’d been marked, one might even say branded, by two horns tattooed onto his forehead, mimicking the horns of Satan. The tattoo had been professionally done at the urging of gang-related peers, and it was a literal “in your face” statement that set a pre-conceived notion for all who met him.

“I was so ready to get that off of him,” Gabler said, beginning the process this past month. Some of these tattoos, she said, are “full of trauma.”

She recalled a young woman who had been branded by sex traffickers. “She comes from a wonderfully supportive family, but she got caught up with drugs and traffickers,” Gabler said. She helped erase part of the girl’s painful past by removing the trafficker’s tattoos, some of which the girl had already tried to cover with new tattoo images.

Youth who leave TJJD before their removals are complete can qualify for financial assistance to continue the removal process and may even receive help getting new removals as they decide to purge certain memories.

For many, claiming a new appearance to go with their new life is an important finishing touch.

“The kids that come to us, the majority have suffered some sort of trauma, they’ve seen people get shot, they’ve had friends who’ve been murdered,” Gabler said. “And a lot of them who were in a gang or in the ‘hood, they’ve tagged themselves with that, but as they’ve matured, they want to change. They no longer want to see that reminder. It goes so much deeper than the skin.”