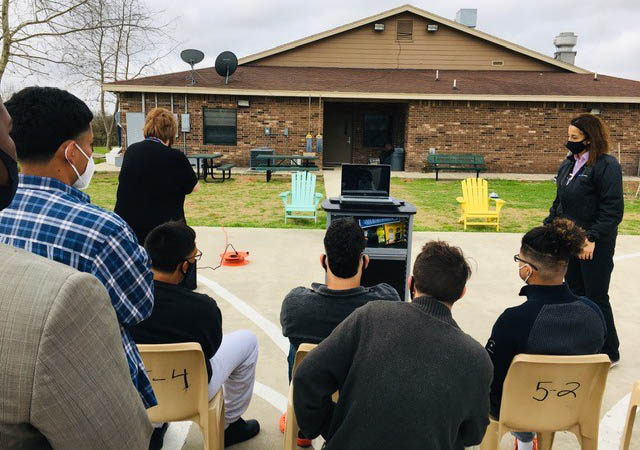 ns. Earlier this month, Ayres House youth got to hear directly from adults serving time at the Kyle Correctional Center.

The meeting was a virtual one, in which the men in residence at KCC answered questions sent in earlier by Ayres youth. They recorded the answers on a videotape, which was then played for the youth at Ayres House.

The kids' questions primarily concerned the designated topic that KCC was working on, reading and literacy, and the mens’ lives at KCC. The men, mostly in their 30s and 40s, have all been incarcerated or served probation previously and are currently assigned to a substance abuse program at the Kyle unit.

The boys wanted to know: What keeps you level-headed in there? What are some of your favorite books and why? For those of us who don’t really read, how can we get more interested in it? What is the main lesson you learned while at KCC? What community re-entry tips have you learned that could help us?

Listening to the answers the KCC residents gave was quite exciting for the youth, said Patty Garza, TJJD’s South region community coordinator, who helped organize the unique virtual gathering March 10 at Ayres. The youth made comments afterward that they felt they shared similar backgrounds with the KCC residents, she said.

The youth and the men at KCC also share a similar status. Both are at a juncture, poised to head back to their communities with renewed personal goals and a plan for progress. Community service is a part of that journey at Ayres House and KCC and the men had prepared for weeks for the literacy project.

The work is part of a broader year-long community outreach effort that has four phases and began with the focus on literacy and the visit to Ayres, said KCC Warden Bernadette Rodriguez. KCC residents and staff will continue the literacy component with outreach to a local elementary school and a retirement home in the Kyle area.

At each visit, the staff of KCC is delivering donated books, including more than three dozen that went to Ayres.

Youth at the halfway house had put in a list of requested titles -- “Mamba Mentality” by Kobe Bryant; “The Hate You Give” by Angie Thomas; “The Giver” by Lois Lowry, the Harry Potter series, Manga books and many more – and were delighted when many of these books appeared last week. 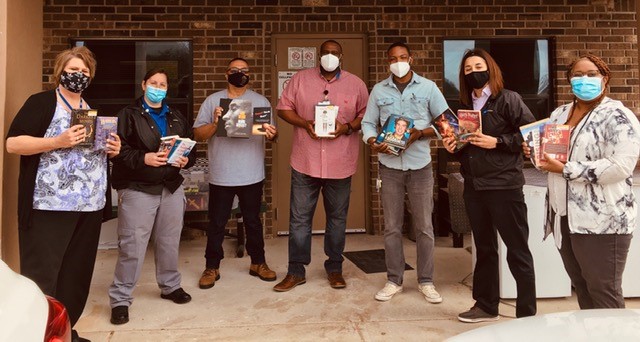 “Some of those books had different volumes we couldn’t find, but the majority we did provide for them, and I know they were excited about that,” said Warden Rodriguez, who explained that KCC staff collected and made the donations.

KCC, based in Kyle just south of Austin, is a privately run facility that contracts with Texas Department of Criminal Justice (TDCJ). The corporation that operates KCC, Management and Training Corporation (MTC) is celebrating 40 years in business this year with the program of community service, Rodriguez said. Both the staff and residents of KCC are working hard to craft the local shape of the outreach, which calls for the remaining three quarters of 2021 to focus on hunger, fighting mental illness and finally, homelessness, Rodriguez said.

For the hunger component, the KCC residents are growing lettuce, potatoes, onions and other vegetables, the first crop of which they’ll donate to the local food bank later this spring.

The residents, who take vocational and anger management classes in addition to the substance abuse program, greatly enjoyed the outreach to Ayres, which was “very personal for them,” Rodriguez said.

“Many of them were in their shoes at one point, so they could relate. They told their own stories of coming up struggling with literacy,” she said.

In addition to showing the video addressing the youths’ questions, the men shared another video they’d made for the blind residents of the nursing home. In this second video, they read poems and short stories out loud, modeling both literacy and caring.

The Ayres youth were keenly in

terested in the virtual get-together, Garza said. “The guys sat still and were 100 percent engaged with the entire KCC resident video. They absolutely loved it and smiled, nodded, laughed,” she said.

The key message from the men: Take literacy seriously. It will make your life easier and you’ll be more confident.

Several of the KCC residents told how reading had opened up opportunities for them. One reported that learning to read well led to his earning three associates degrees ensuring he’s employable and another urged the boys to give reading books for pleasure a try.

The men also shared their life skills tips: Maintain a small circle of friends that you know have your back and want the best from you. Connect with a sponsor or mentor and stick with the program. Set small goals and build on them, one step at a time.

“I know it’s corny, but education really is everything,” one man said. “They can’t take away what you learn and know.”