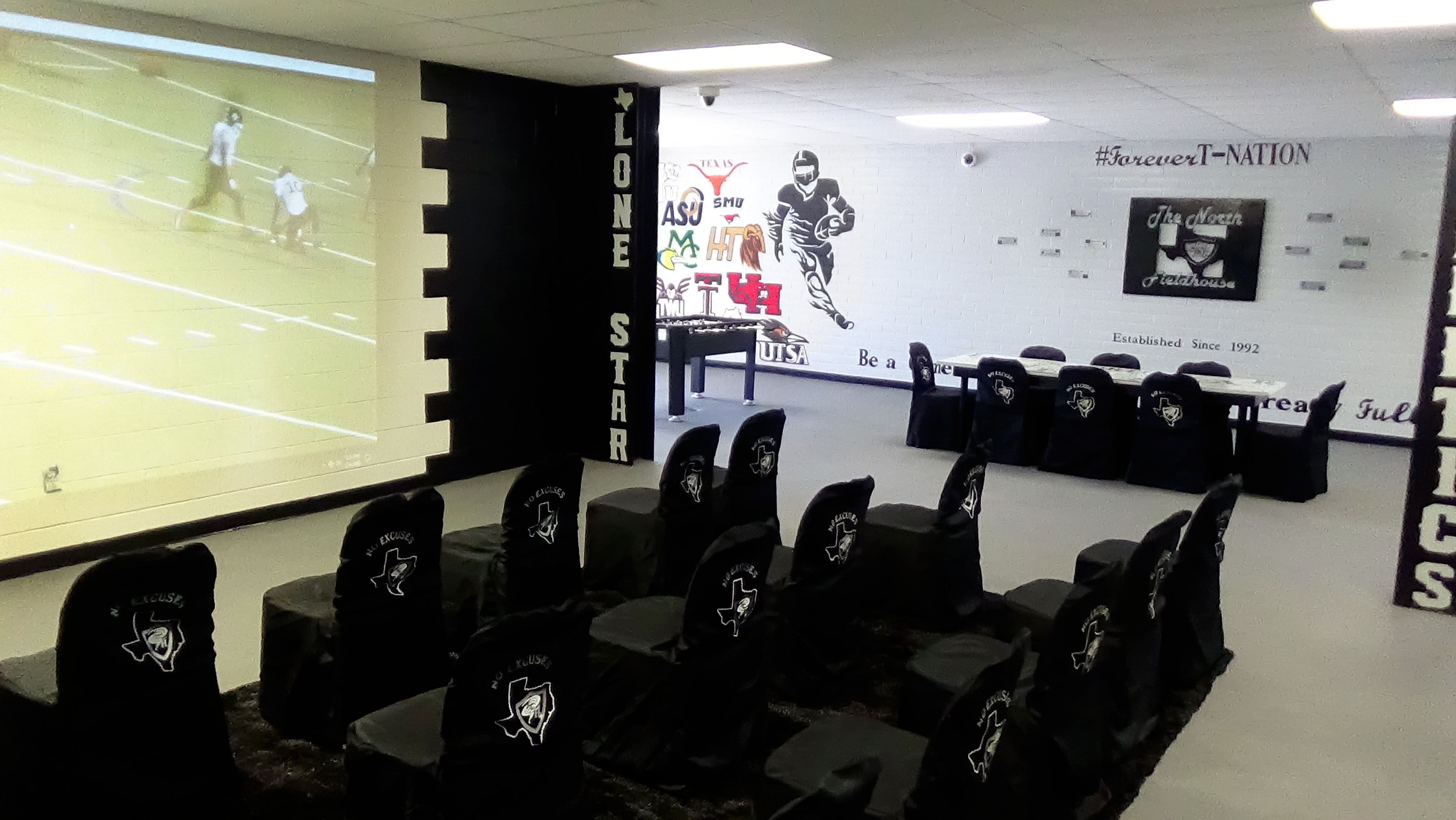 Coach Roy J. Burns and several of his players, sadly sidelined from the gridiron and the courts this pandemic year, found a way to score big in another field of endeavor.

They transformed a building at their Gainesville campus into the North Fieldhouse, a virtual (make that actual) homage to the power of sports and impact of “T-Nation” – shorthand for Gainesville’s Tornadoes teams -- on the young players.

This wasn’t just some paint refresh. Coaches and students collaborated to createdramatic large sports graphics and carefully considered gathering nooks, all blocked out in the Tornadoes’ black, white and gray colors. One wall was designated for plaques tohonorrecent all-district and all-state Tornadoes and another for photos memorializing coaches who’ve worked at the state school.

Tables and chairs got special coverings and a lineup of lockers was used to proclaim “Tornadoes” in crisply painted letters. Exhortations -- “No excuses, just hard work!” – and inspirations covered the walls. 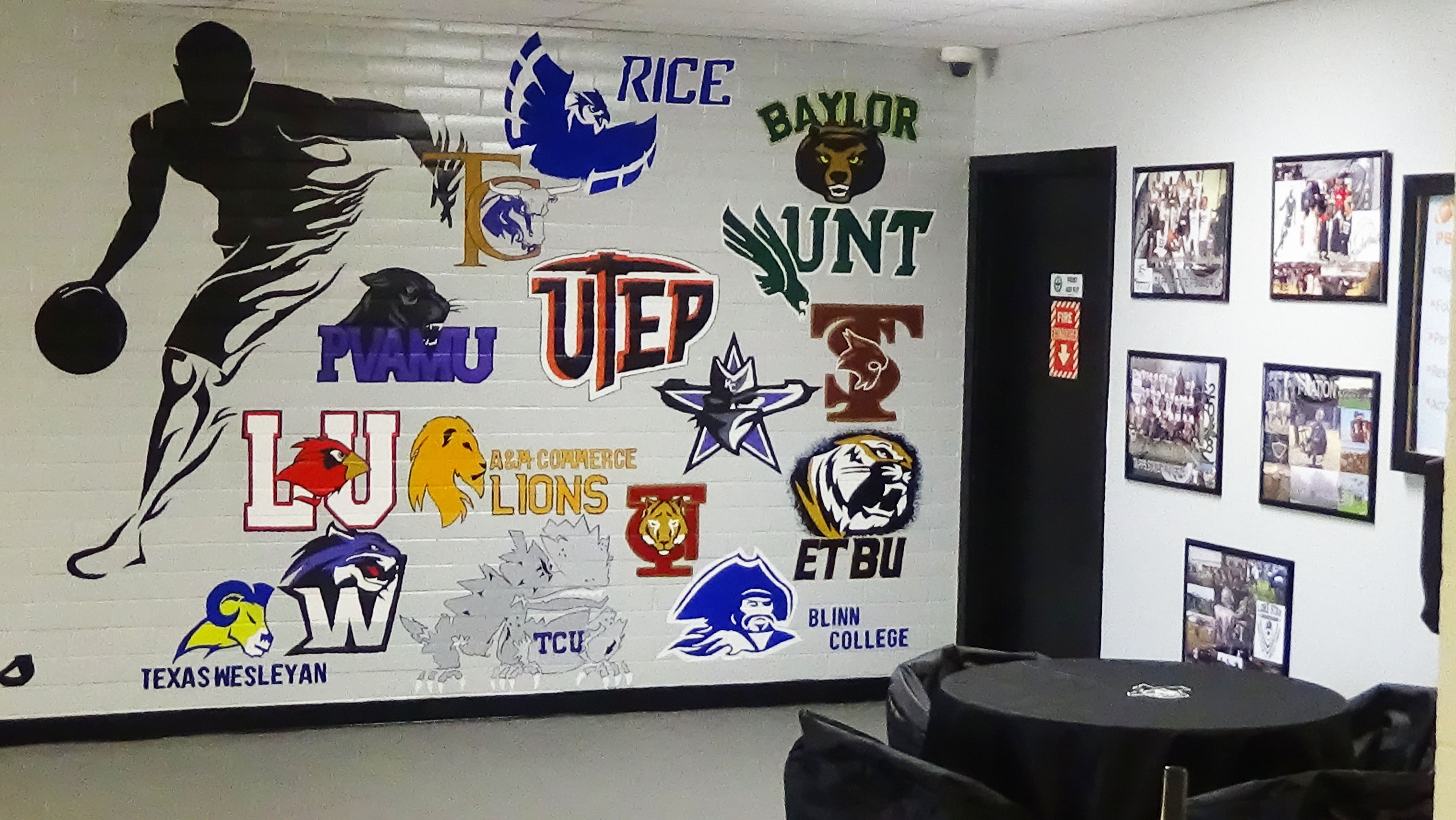 ach Burns, is how the youth poured themselves into this nine-month project, providing the brains and the brawn at every juncture.

“They painted everything in that room from the logos to the Texas symbol and the T-Nation symbols. Even the paint on the floor they did. Everything was done by the kids,” he said.

“I have one kid, who did the painting, he’s over there every morning, just looking at it,” Burns chuckled.

The project got started back in March. Two things had happened. The recreation department had recently relocated their offices to the new “Main Event” recreation center, completed in 2019, which left a vacated space up for grabs. And, the pandemic began its spread across the U.S., causing major events and NBA basketball to shut down.

As they watched closures at schools and suspended sport schedules, Burns said he and Coach Henry Thomas had an inkling they might not be playing TAPPS sports for months, not in the summer and maybe not in the fall. (They were right.) 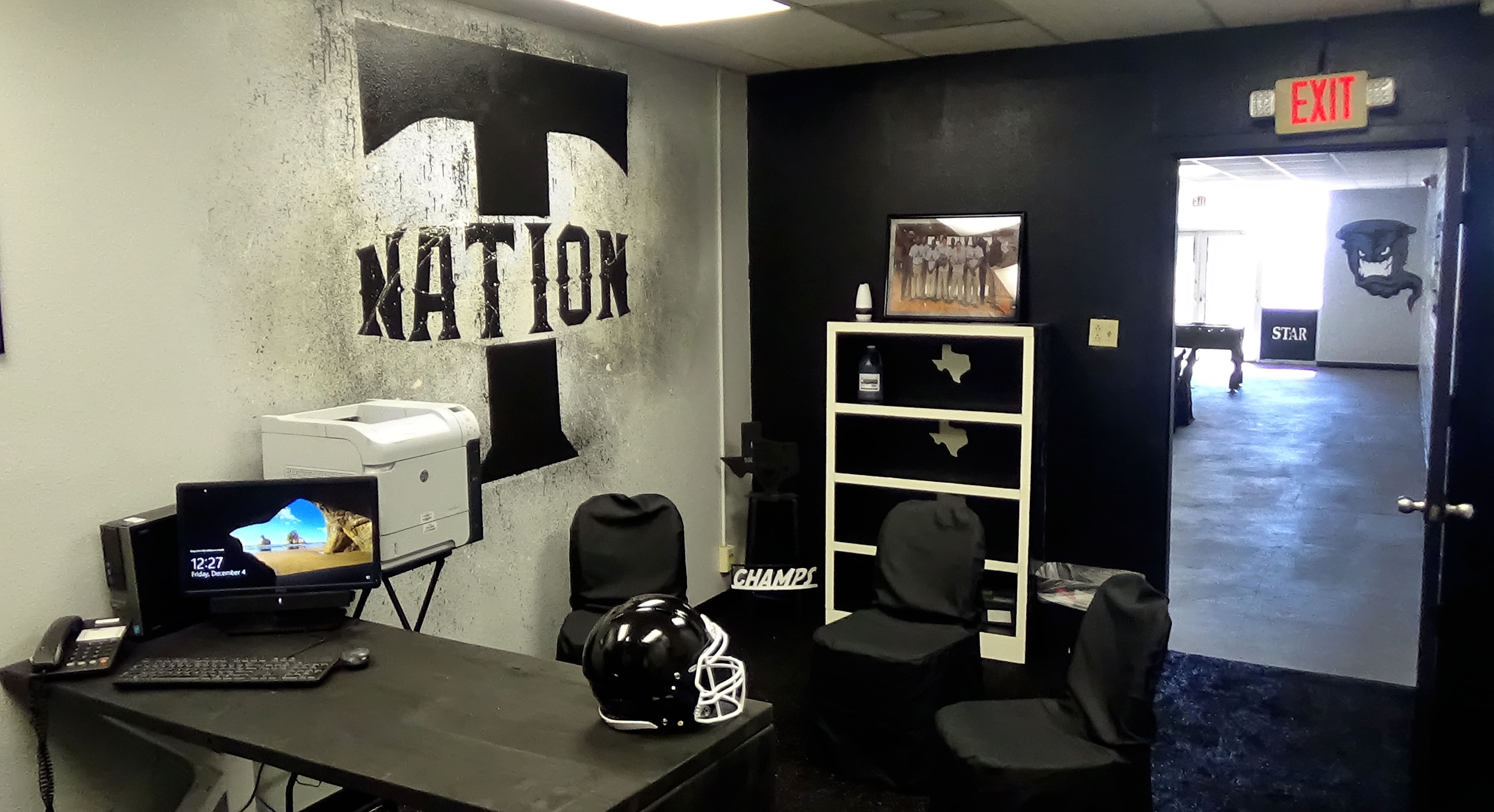 So they began a game plan for the renovation, which would provide a long-desired special place for the youth participating in football, basketball and track. Those are the three sports teams that Gainesville State School fields within the Texas Association of Private and Parochial Schools (TAPPS).

The project would give everyone, coaches and disappointed youth, a new focusfor 2020, as theycontinued to build Tornado team spirit and camaraderie; what Burns calls “a community within a community.”

That room, with a projector and a white wall for a screen, is set up for reviewing game footage. Adjacent are Burns’ office and meeting tables. The meeting area boasts a specially tooled metal si 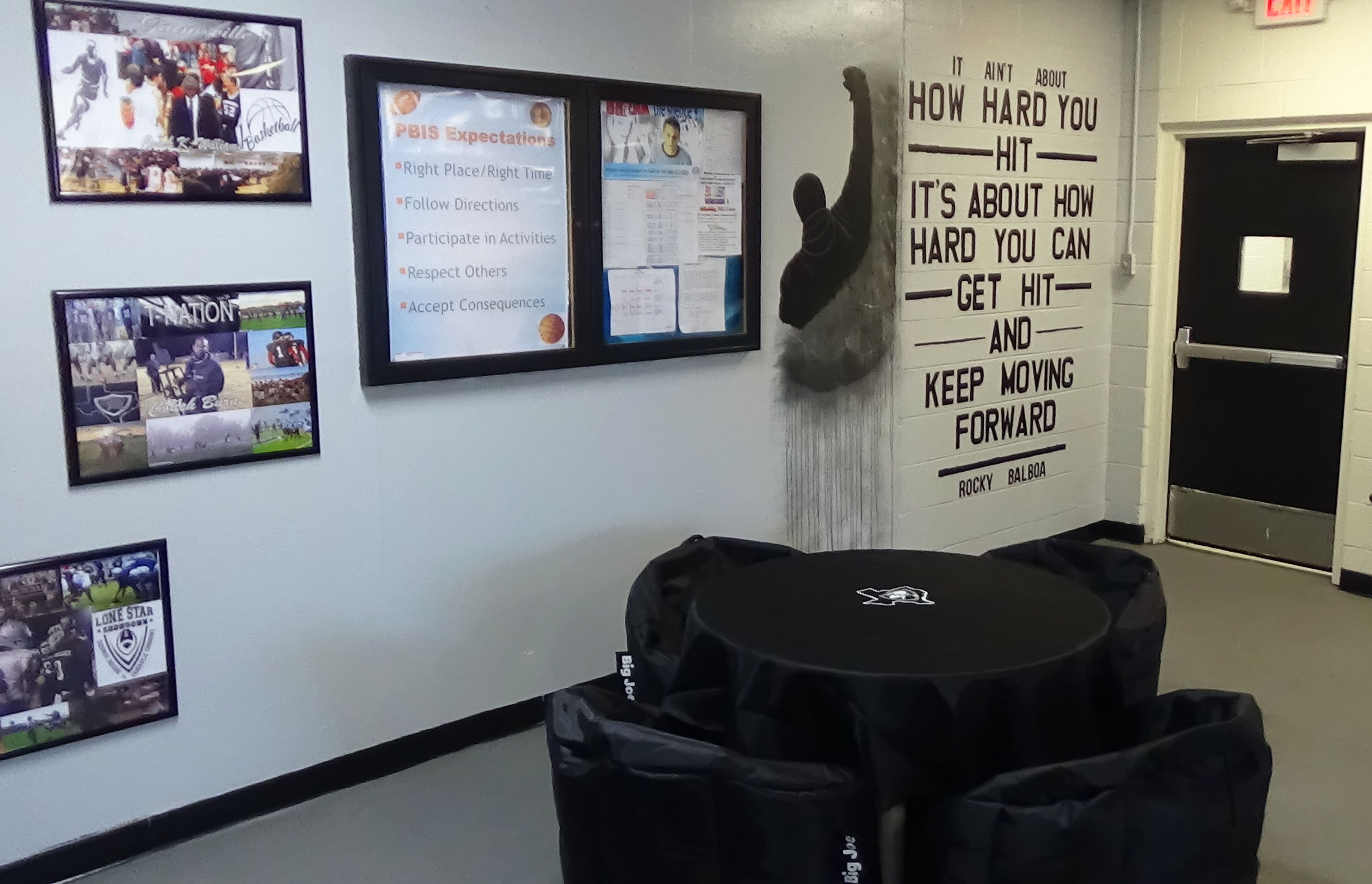 gn heralding the North Fieldhouse, courtesy of the school's active and accomplished welding program. The metal shop also provided the plaques honoring past star players. Various campus staff pitched in to "sponsor" those players, which paid for the materials.

On and off, about 20 kids had a hand in the fieldhouse project, helping from the design phase through the final paint touch-ups.

“They liked it, because it has a little bit of them in it,” Burns said. “I never made a decision without asking them what they thought about it.”

“. . . Every single piece of artwork located in this area had a game plan and debate about it including: its location, size, and the individual youth who would be responsible for drawing and painting it.”

The group decided, for instance, to feature college football logos on one wall instead of Texas city skylines. That determination came after deep discussion concluded that the skylines might exacerbate certain rivalries, while the college logos could be more expansive and inclusive, offering something for everyone.

Overall, theNorth Fieldhouse game plan, you might say, was big on teamwork and precise execution.

As Burns sees it, the project, especially the wall of plaques honoring All-State and All-District players,dubbed the “#ForeverT-Nation” wall, manifests respect and appreciation for the youth. He predicts it will go far to build trust and demonstrate the importance of teaming up to achieve great things.

“I think they can really see we apprecia

te them. The kids now, and to come, will see that ‘we do care about you and if you work hard enough, you can get your name on this wall’.”

This special place for players might just also entice youth considering trying out for teams.

“We’re trying to use those past successes as motivation for our present kids. And so far it’s working!”Burns said. “We’ve had 50 kids sign up for off season (training).”