TJJD has announced its first class of “Texas Model Champions,” team leaders who are being recognized for their excellent work with youth and dedication in becoming agents of change on their campuses. The Champions are:

These four, who between them have nearly 50 years of experience at TJJD, excelled during an extended, rigorous evaluation in which they showed they are effectively practicing the tenets of the Texas Model, which promotes a compassionate, trauma-inform 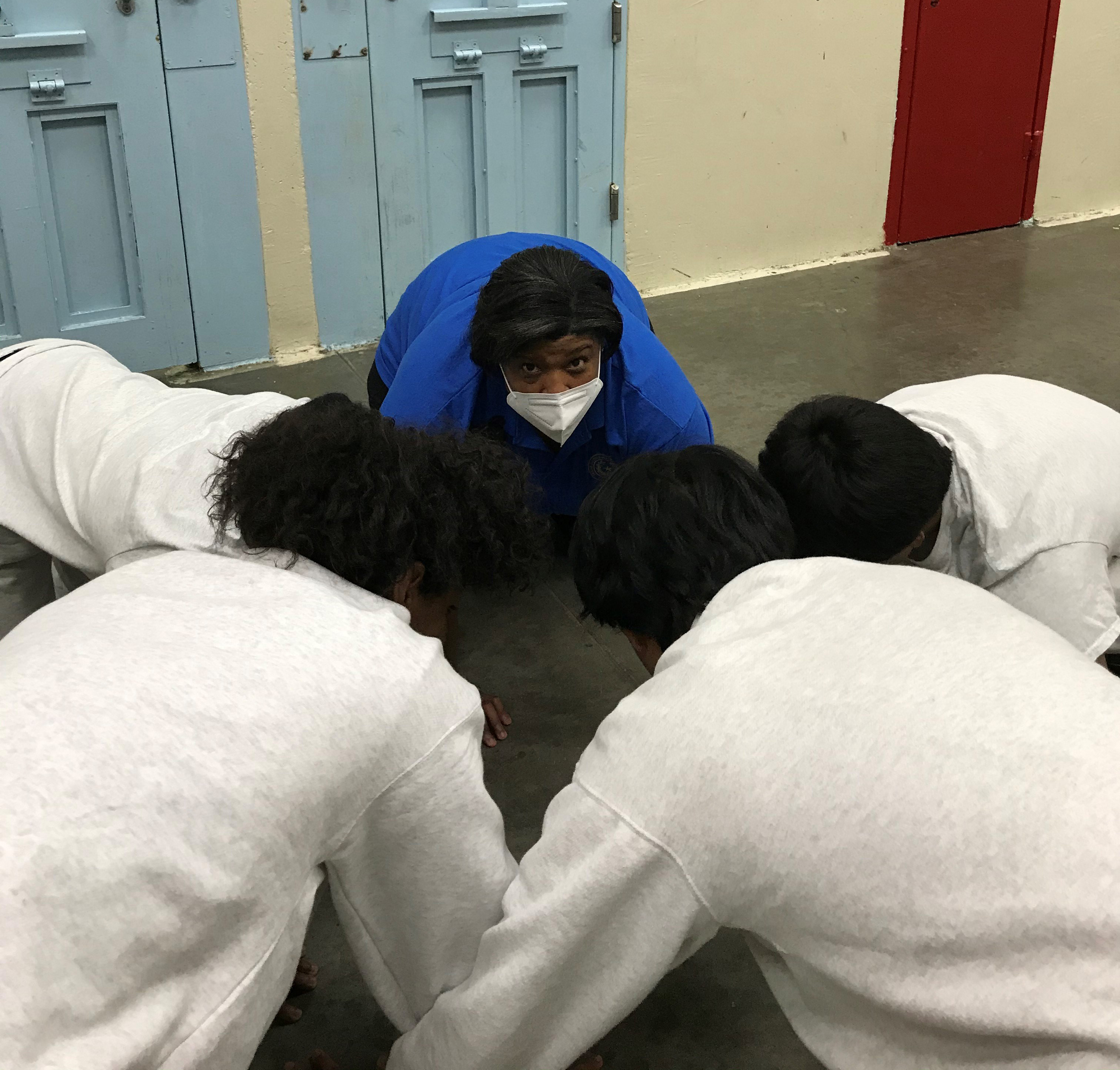 ed approach in working with the youth.

The Texas Model is a major reform program begun under Executive Director Camille Cain that aims to help TJJD youth find lasting success in life by connecting with andempowering them to make positive changes.

Staff across TJJD have been training in the Model since July 2019 and the newly named Champions have undergone extensive training. As team leaders, they will now be teaching Texas Model strategies and concepts to the Youth Development Coaches at their campuses, said Troy McPeak, Associate Director of the Texas Model.

Together, the leaders and youth coaches are responsible for setting the right tone and skillfully deploying the model and maintaining campus safety.

“I’m very excited about this initiative. So much of the Texas Model is focused on the kids, but we cannot forget the staff. This empowers them,” McPeak said.

The Champions certificate recognizes the work they’ve done and that they’ve mastered the concepts and techniques that create meaningful and temperate interactions with the youth, McPeak said.

Galindo said that her training in the Texas Model methods is helping her better understand the youth in her care.

“I really feel that all of the changes are positive at our agency and this new way of working with youth is more natural than the correctional system we used to use,” she said. 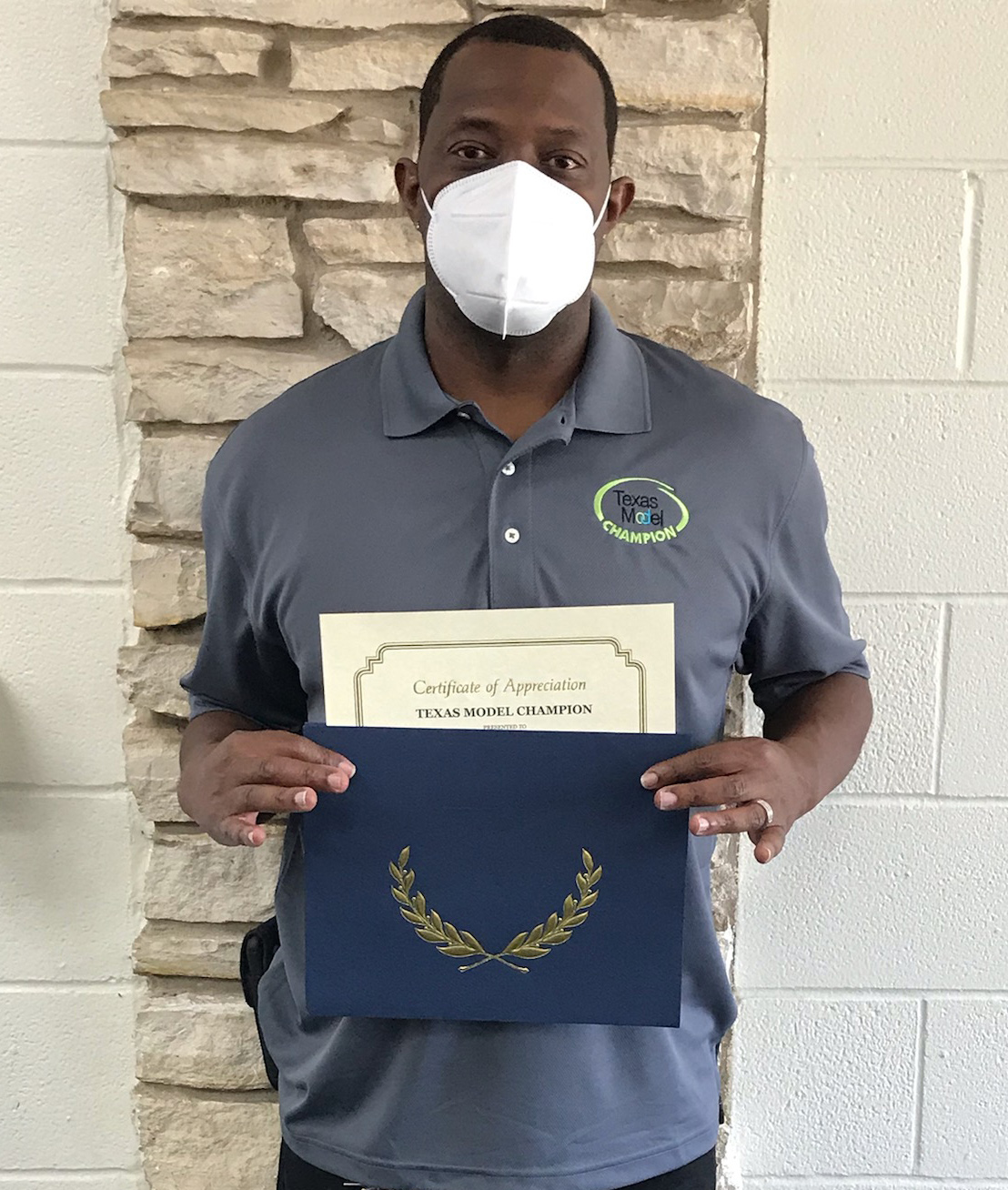 The other champions agreed that the Texas Model is proving to be an effective therapeutic approach and affirming their career choice to work in juvenile justice.

“I’ve always loved working with youth,” said Spears. “In my opinion this is not a job to me, when you love your profession it’s not considered work in my eyes.”

The Champions program, conceived by Director of Secure Facilities Alan Michel, and developed in collaboration with Texas Model program staff, taps the Texas Model Mentors who are assigned to each campus. 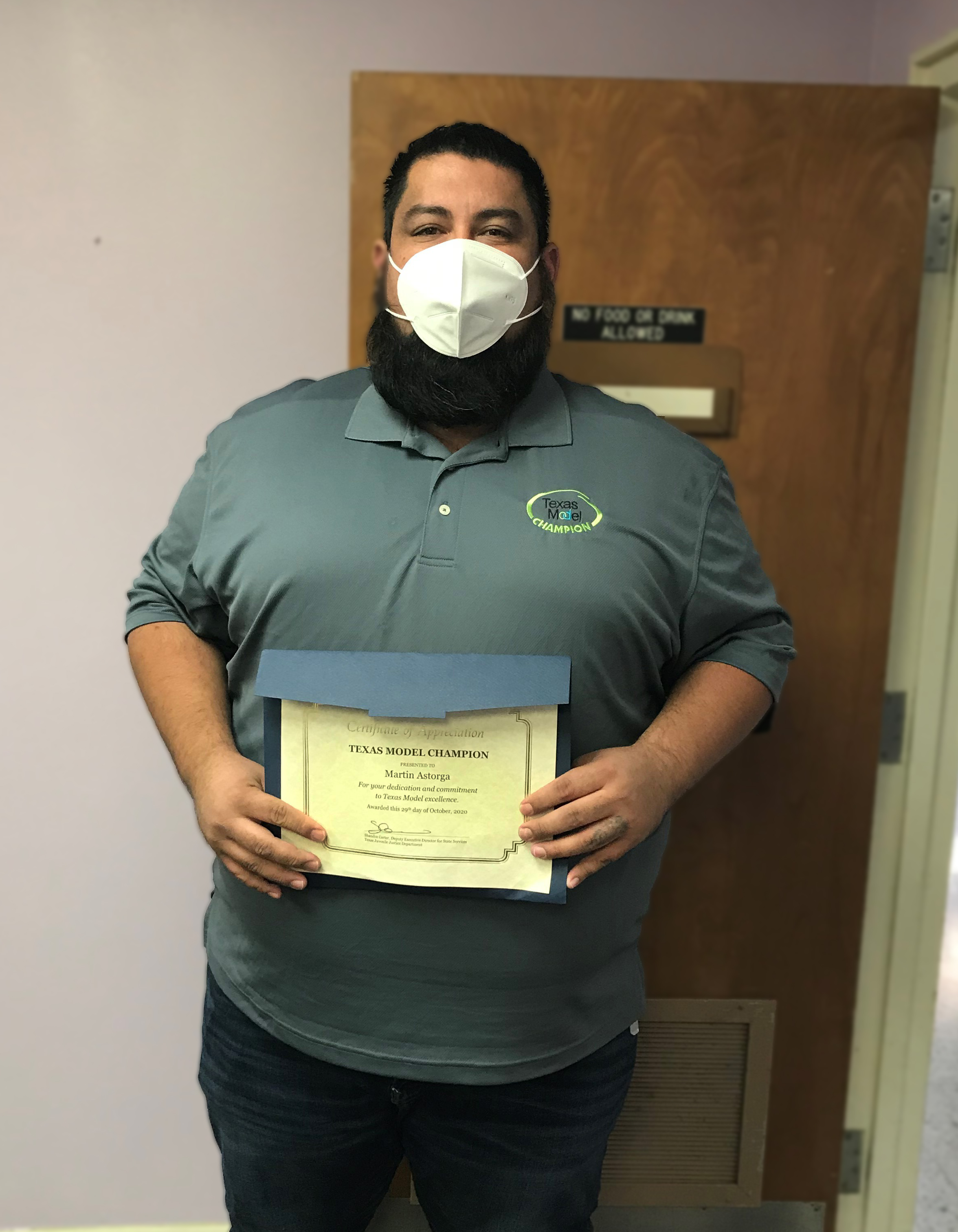 The Mentors, as their name implies, help guide facility staff in these new Texas Model practices. Each campus is served by one Texas Model Mentor.

This fall, the Mentors launched the Champions program by selecting a candidate for potential Champions designation. After enlisting the nominee’s agreement to enter the program, they observed them in their daily interactions with youth for about a month. They coached them every day and also reviewed body camera footage from periods when they weren’t present to get a full picture of how the candidate was handling a variety of situations.

The program is rigorous by design. “We want to make sure people are embodying this and really living the principles,” McPeak said.

Some of the specific techniques and behaviors the Texas Model Mentors watched for:

“We want people to be excited by the Texas Model,” McPeak said, because it both elevates the work and unlocks the potential of the youth. 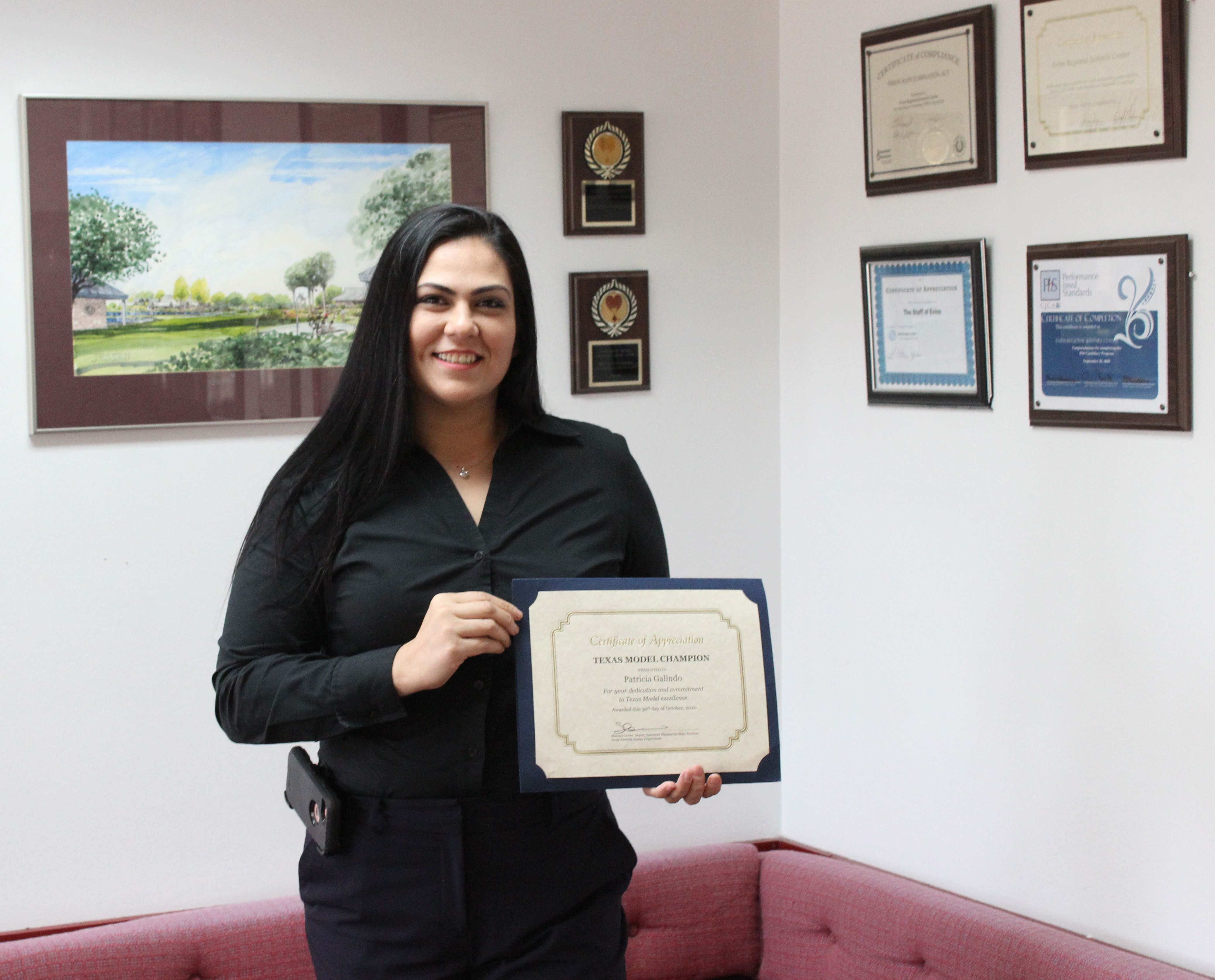 Research shows the techniques encompassed by the Model work to help youth feel safer, gain insight into their behavior and better control their emotions, all of which paves the way for them to make progress academically, socially and personally.

TJJD staff who fully embrace these new methods are key to steering the campuses toward the more caring and proactive culture that defines the Texas Model.

The Champions program dovetails well with the Texas Model, accelerating the cultural shift by validating and empowering staff as they seek to empower the youth. McPeak expects it will ripple through the TJJD workforce, with new Champions nominees evaluated and named until all team leaders have earned the certification, perhaps by this spring.

After that, other staff will be eligible for the program, giving them the opportunity to show their competency and empowering them as agents of change.

“The ultimate goal is that a year from now we have dozens of people coined ‘Texas Model Champions’ at each of the campuses,” McPeak said. “But we’re starting with team leads because they’re going to be the driving force.”