When you’re a teenager seeking that first job and desperate to begin to earn a little money, it can feel like you’re walking with your sneakers tied together. You need to step up, but you’re worried that you’ll just plain plank.

Afterall, you lack experience, you’re not keen on talking to adult strangers, and the interview process is a black box. 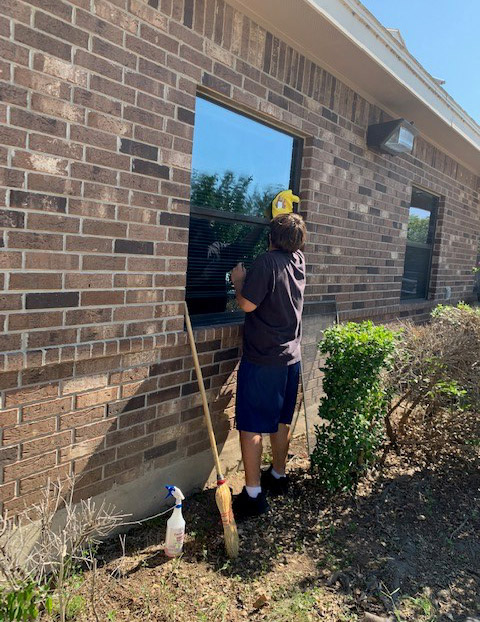 That’s how T.E. felt the first time he interviewed for a job. “When I was out in the world, I would have an interview for a job and I wouldn’t know how to answer. I would freeze. I’d be like, ahhhhhhh.”

So when it came time to apply for a job as a student maintenance worker at Ayres Halfway House, the TJJD youth decided he wouldn’t be caught fumbling for words. He worked with a mentor and Ayres’ staffers to prep for the upcoming job interview.

“I came in prepared,” he said, speaking confidently in an online video call in which he recounted the interview.

“When they asked me, ‘Why did I pick outside maintenance?’ I told them: ‘I love nature and being outside and walking by a place and having it look real presentable.’”

T.E., 18, did so well throughout the interview that Human Resources Specialist Stephanie Trujillo-Ramirez joked with another panelist afterward that she’d been looking for his earpiece.

“Oh my gosh, Senior Coach Nicki Graham and I didn’t even recognize the kid, that’s how well he did,” said Trujillo-Ramirez, who helps oversee the new on-site job program at Ayres.

“He was providing eye contact, and he knew what he was talking about. It’s like he had been doing interviews for years!”

ADAPTING TO CHANGE AND LEARNING THE DRILL

In a normal year – meaning not 2020 – several Ayres Halfway House youth would be working at outside jobs at nearby restaurants or nurseries in San Antonio.

But restrictions put in place to make youth and staff safer during the pandemic have limited their ability to leave for those part-time jobs. Ayres Superintendent Frederick Wilson and supervisory staff decided it was time to create some inside work for the youth, and Ayres was granted funds to pay the student workers an hourly wage.

“It helps them to be able to say they obtained employment for this time,” said Trujillo-Ramirez, “and it’s another thing to put on their resume.”

They modeled the set up on McFadden Ranch, a TJJD halfway house in North Texas, which has been running an on-site jobs program for many years. McFadden had found that its program provided an outlet for youth who were not quite ready for outside jobs or faced other constraints.

Like McFadden, Ayres administrators wanted the youth to get as much out of the program as possible and so they structured it to mimic the outside job experience. They posted the “openings” on the bulletin board, created job application forms and set up a job application panel of three staff to interview the youth for their desired position.

At the first panel review early this fall, the panelists asked T.E. and the other two youth interviewing about applicable skills and past work experience, why they wanted a particular job, and why they’d be good at it. The panel aimed to give the youth an experience similar to the real-world, but in a safer setting.

Creating a safe environment is a critical piece of the Texas Model, the umbrella of activities and protocols for working with youth at TJJD. Safety is foundational with the model because it lessens fear and eases the way for youth who’ve experienced trauma or neglect to express themselves. Youth cannot trust the adults around them until they feel safe.

All three youth did well in their interviews, though T.E., having prepped and gone in with a winning attitude, “blew everyone’s socks off,” said Patty Garza, Community Relations Coordinator for Ayres and the South District Parole Office.  Garza, Trujillo-Ramirez and mentor/intern Fernando Vargas were the staff who helped T.E. prepare for his interview.

T.E., who hopes to find work as an electrician’s helper when he leaves Ayres, says he is enjoying feeling successful as Ayres’ Outdoor Maintenance student worker.

“The place looks better,” he said. “I get compliments every day.”

FOOD, FEEDBACK AND SPACE TO IMPROVE 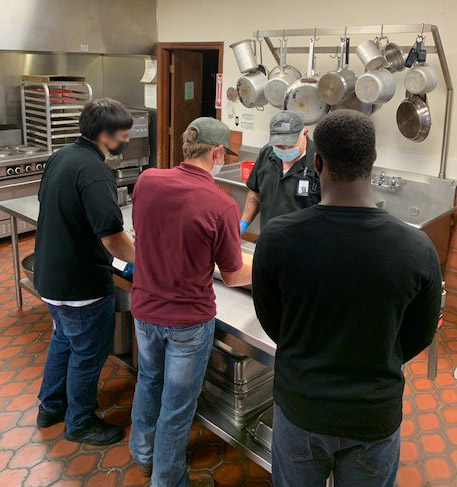 The halls and grounds of McFadden Halfway House are looking spiffy, too, thanks to the ongoing student worker program there in which youth are painting, mowing, cooking, cleaning and tidying up.

Students are always eager to apply for the on-site jobs, and right now, with off-campus work off limits, the McFadden jobs are completely filled with 11 student employees, said Karen Richroath, Education Re-Entry Liaison at McFadden.

Even in pre-pandemic times, youth compete for these jobs where they’re paid $1.50 or $1.75 an hour, money that goes into their trust fund to build savings for when they leave, and for occasional splurges at the canteen.

Requirements to be hired are strict: The teens must be 16 or older, have a positive behavior record, be in good standing in school and therapy programs and have completed 12 hours of community service work. If they’re still in school, they cannot work more than 20 hours a week at McFadden.

Once hired, they're immersed in new tasks and learning many practical skills, Richroath explained. Youth working in the kitchen, for instance, can parlay their experience into a food handler certificate, burnishing their resume.

Not to mention, she said, that they learn to create healthy, delicious dishes.

“I mean, who doesn’t need to learn to cook?”

Most youth do well at their jobs and some even contribute more than anyone imagined.

“We had one youth who knew how to patch walls,” Richroath said.  “He even replaced a sink, with an actual disposal!”

“He was very talented,” she said, recalling that when she helped the youth fill out his Texas Workforce application, they spent more than an hour listing the seemingly endless number of tools he knew how to use.

To prepare to work in either maintenance or the kitchen, the McFadden student workers watch videos about how to handle food, tools and janitorial supplies safely.

Those who’ve worked in the kitchen at McFadden are advised to list “McFadden Café” as part of their experience on future job applications. McFadden supervisors can verify that experience because they keep records on the students’ halfway house jobs.

The campus jobs are monitored as closely as a real-world job might be, with regular evaluations and reports kept on the youth’s work habits and progress at both McFadden Ranch and Ayres House.

Along with those hard job skills, the teens are learning life skills and the sometimes unspoken rules of work, such as listening respectfully to a supervisor, asking for help when stuck and taking direction gracefully, Richroath said.

For the most part, the halfway house youth demonstrate a tremendous work ethic. “It’s really good to see them take such pride in their work,” said Trujillo-Ramirez of Ayres.

Jason White, a cook at McFadden Ranch, sees their eagerness too. The youth learn quickly in the kitchen, because they recognize the utility of cooking (eating!) and enjoy the hands-on tasks, he said.

“Whatever’s on the menu, they’re making it” -- albeit with guidance from White and Food Service Manager James Bledsoe -- and it makes them proud, White said.

There are many protections in place to avert serious issues. The youth don't use knives in the kitchen, for example. But they otherwise perform their jobs completely and that means the novice workers do sometimes mess up, usually in small ways, Trujillo-Ramirez and Richroath said.

“We have to deal with some excuses," when occasionally a youth will try to bow out of work, but still participate in the day's fun activities, Trujillo-Ramirez said. “But we don’t want them to think they’re ‘not really working,’ or that the job’s not serious. You cannot tell an employer that you don’t feel like working that day.”

Just like they would in an outside workplace, the student workers face corrective feedback and verbal warnings or consultations to discuss bumps in their performance, Richroath said.

But the halfway house job supervisors, usually Youth Development Coaches, keep the consequences proportionate and on a sliding scale, giving the teenagers time to make good.

This moderated approach comports with the Texas Model, extending youth some space and time to improve, instead of leaping to punitive measures.

In this respect, a McFadden or Ayres job is a true training ground, and an excellent confidence builder, especially for a youth who has “zero confidence,” Richroath said.

“We modify the job to give them some extra chances and learn from their mistakes,” she said. “We give them more chances than would happen in a real job. They’re still learning.”