McFadden Ranch honored its 2020 graduating class of six young men with a first-ever virtual graduation for the halfway house in Roanoke. 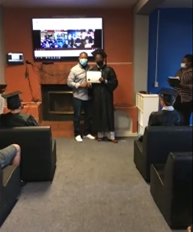 The Sept. 28 ceremony was broadcast simultaneously on Zoom and Microsoft’s Teams, allowing the graduate’s delighted families and volunteers to participate.

Parents watching at home said they were happy to see their sons graduate and witness the ceremony. (See the Zoom view in the picture, right and below.)

“I thought them doing this for the boys was an excellent, positive experience for them. I thought it was confidence-building and great way for them to take pride in themselves,” said one mother, noting that each boy spoke at the end of the diploma presentation and also chose a song to play as they marched off.

“It was good to see him and celebrate with all of them,” she said.

The Zoom ceremony, created to work within COVID-19 restrictions on in-person events, was especially helpful for parents who live far from McFadden Ranch, said another mother, who resides in West Texas. “It was nice to watch the video,” she said, despite a few technical hiccups in which some parents’ unmuted microphones caused brief interruptions. 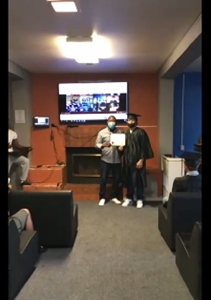 xpect their sons home within weeks, ready to start their next chapter in life. One plans to launch a lawncare business and the other hopes to train in welding or diesel mechanics and later find a job to finance college.

In addition to being the first to graduate on a livestream, the McFadden Ranch group was the first TJJD class to hear former President Barak Obama as their virtual commencement speaker.

Obama appeared on a large TV screen, which played his pre-recorded speech “Graduate Together: High School Class of 2020 Commencement.” In the talk, released earlier this year for public use, the president congratulates this year’s graduates on their accomplishments and urges them to be prepared for future challenges.

The XQ Institute organized the Obama address earlier this year to provide all 2020 graduates across the US with a special moment at a time when in-person graduations had to be cancelled or curtailed. The institute works with schools in partnership with The LeBron James Family Foundation and the Entertainment Industry Foundation.

Despite the pandemic, Obama said, “what remains true is that your graduation marks your passage into adulthood — the time when you begin to take charge of your own life. It’s when you get to decide what’s important to you: the kind of career you want to pursue. Who you want to build a family with. The values you want to live by.

The former president advised the class of 2020 to “not be afraid,” because the country has been through tough times before, historically, and always emerged stronger. He also urged graduates to “ground yourselves in values that last, like honesty, hard work, responsibility, fairness, generosity, respect for others You won’t get it right every time, you’ll make mistakes like we all do. But if you listen to the truth that’s inside yourself — even when it’s hard, even when it’s inconvenient — people will notice. They’ll gravitate towards you, and you’ll be part of the solution instead of part of the problem.” 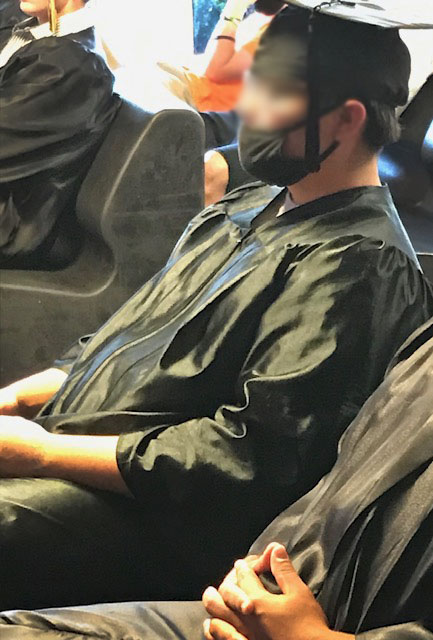 Another first: The graduates chose their own marching music, which included Tupac’s “Dear Mama” tribute and other songs.

The McFadden Community Advisory Council provided refreshments and as a special honor, the Denton Kiwanis presented each youth with a $50 check and a letter of congratulations.

TJJD employees also were invited to participate virtually during the ceremony. "Together we all wanted to affirm these students in a job well done on this joyous occasion," said Supt. Johnson, thanking those who attended and those who helped make the event possible.

She added that she hoped it ignited a fire under the other youth to earn their high school diplomas or educational equivalency certificates.