Texas Model activities are fun, with a plan

Troy McPeak betrays only a hint of a smile as he sets the two teams of adults scurrying across the floor at cross purposes.

Team One is told to knock down the orange pylons and Team Two is instructed to put them back up. And quickly. The 20 or so staff bend and duck, laugh and swing arms as they swoop up and down, swarming over the red tile floor of the Giddings State School chapel.

McPeak orders them to switch roles. They pause, and begin again, with the opposite goal, bees on a mission. 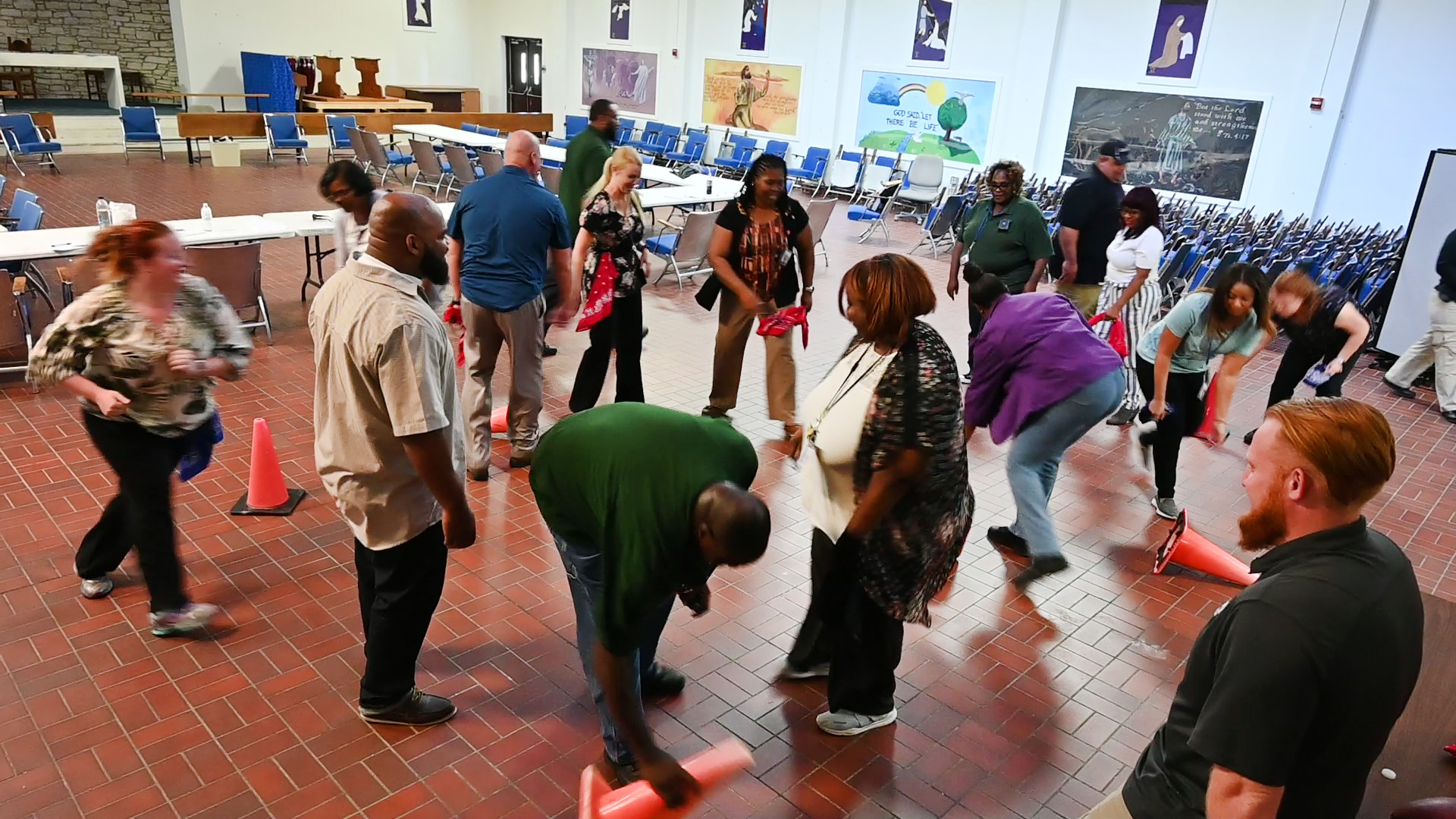 It seems fun and games have erupted at TJJD. Outside the chapel, the youth are shrieking in delight during a game of splash kick ball. Inside, the adults are grinning and loose as rag dolls. This day is clearly more enjoyable than filling out paperwork and miles ahead of a visit to the dentist.

But it’s not exactly all play time either.

McPeak is training the staff in this and other exercises they can use that comprise the Texas Model  constellation of activities. These entertaining, sometimes hilarious, but strategic games draw on the latest brain development science and trauma-informed care concepts to help youth gain control of their lives.

McPeak has just run the adults through the competitive high-activity pylon game so they can experience “dysregulation” -- a heightened state of raised emotions,  with a quickened heart beat and respiration -- followed by a calm down period in which they get “regulated” or back to normal.

He wants these staff members to learn the game and importantly, to feel what the youth will experience as they play this and other Texas Model activities that challenge them to build resilience and learn emotional restraint.

“We want to be proactive,” McPeak explains afterward. “We can’t expect staff and youth to truly understand the art of regulation if they have not practiced first.”

Regulation and dysregulation was the theme that came up again and again. By late 2020, virtually everyone working with TJJD youth -- Youth Development Coaches, caseworkers, therapists -- understood why and was employing these activities every day.

“Our main goal of these games is to teach kids to regulate their brain and body. Most of the reasons the majority of our youth are incarcerated is they’re not able to regulate their emotional state, which  leads to them doing something that’s unacceptable -- and they get arrested and put in detention,” says Bracken, who hails from Waco and Baylor University where he studied education and earned a master’s in sports pedagogy.

“So if we can teach the youth to interpret the environmental stresses and sensory inputs they’re going to encounter in life, and to respond in ways that aren’t maladaptive, they have a better chance of being successful.”

Why are some young people able to regulate and 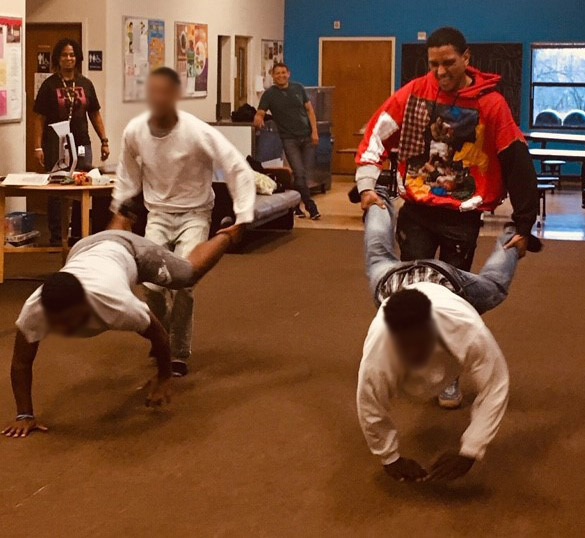 others not so good at it? That is a deep subject that gets to the heart of the Texas Model methodologies. Youth who end up in trouble with the law, who wind up at TJJD, have a much higher exposure to trauma. Studies have found this to be true of similar youth populations nationally and TJJD statistics confirm it for Texas youth caught up in the justice system.

On the whole, TJJD kids have experienced far more neglect, family division, sexual or physical abuse and other traumas than youth in the general population. More than half have experienced family violence and about two-thirds report having had an incarcerated household member.

(You can find more on this topic in our article about ACES or Adverse Childhood Experiences.)

Many justice-involved youth have lived their early life in trepidation, if not fear. The multiple and recurring traumatic and chaotic events they’ve experienced have molded them to be ever vigilant, and their brains, to varying degrees, have become over-reactive. Poverty and other circumstances, such as family losses or addiction, may have piled on, exacerbating fears and feelings of powerlessness.

Learning differences, either caused by or contributing to emotional control issues, complicated matters as well. Nearly 90 percent of TJJD youth are either one, two or three grade levels behind at the time of commitment.

For these youth born of trauma and hard places, their “survival brain” has taken charge. And this has unfurled a cascade of issues, because living in survival mode thwarts development. It likely interfered with their ability to build the trusting relationships that are necessary for learning. In turn, it eroded their ability to focus on school and hobbies, not to mention how it diminished their basic enjoyment of life.

You don’t need a course in Maslow to understand this. In his trainings, Bracken puts the activities he’s teaching into this framework of early brain development:

When a child is an infant or young toddler, they need external regulation. (Picture the dangerous bravado of an 18-month old; they need nearly constant supervision.) This is step one.

The next step or level of development is “co-regulation” in which a child learns alongside a guiding adult how to behave, deal with the ups and downs of life and make good decisions. The adult models, instructs, protects and provides that “safe space” that makes room for learning.

The third step or level of level of development is, of course, internalized self-regulation.

For youth who’ve been traumatized these foundational steps have been short-circuited and ascending to step three has been difficult, even elusive.

The circuit board needs re-wiring and a key way to do that is to engage in play in a controlled environment. “Play disarms fear,” as Bracken and McPeak say, and that clears the path to take us back to the foundational learning.

“Most mammals play in their early development. So play is a way to teach children to develop their imagination, increase their physical and cognitive strength,” Bracken explains. 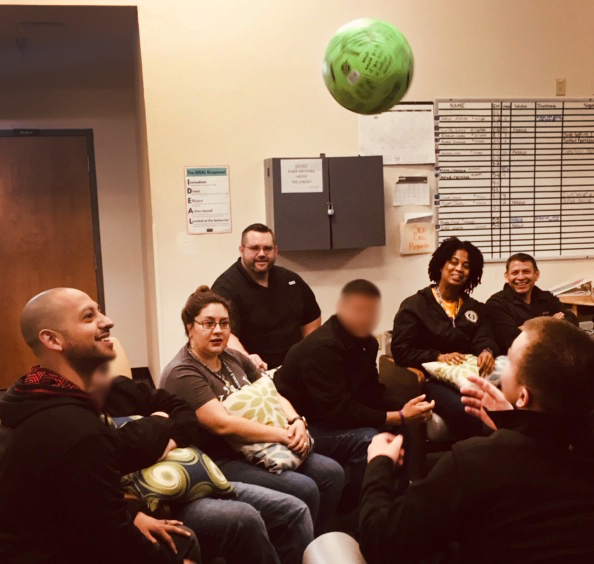 Play unlocks that frozen “flight, fight or freeze” mode that a child who’s been traumatized may be stuck in.

It is impossible to be angry when you’re laughing, Bracken points out.

And so the Texas Model games have begun in earnest: Ball games, marshmallow tossing, dancing with parachutes and racing crazily around the room playing chase or wheelbarrow. And that’s tip of the iceberg. There are dozens of games in the literal manual, the Texas Model activities book.

But always, these energizing and exciting games are followed by deliberate actions that bring calm. These are simple movements, pushing on a wall, blowing on pretend bowl of soup or another breathing exercise. These proprioceptive (physical) activities bring down the pace, slow the heart rate and tamp the adrenaline. This helps everyone get back to normal by switching out of their “high engine.”

In terms of what’s happening neurologically, the return to normal puts the frontal cortex, the center of reason, back in charge.

By giving the youth a chance to “flip their lid” (to a degree)and then recover, the trainings are proactively helping the teens build emotional resilience, says McPeak, who joined TJJD after pioneering a trauma-informed program, Trust Based Relational Intervention (TBRI), at Williamson County Juvenile Services.

“Science suggests that by practicing these skills in a playful environment, it will take only five to twelve repetitions to literally build new synapses in the brain,” he says.

How else to learn to regulate, but through practice?

Bracken tells about a favorite game that illustrates perfectly how this works. It’s called “Tiger Tails” and looks something like flag football, but with pairs of players composing a head and a tail of the tiger.

It requires teamwork. First, the group of youth, perhaps a dozen or so, get set up as “tigers” in teams of two. The “tail” holds onto the “head” as the pair runs after other tigers, trying to yank off their tails (strips of cloth tucked into a collar or a pocket).

The tiger tail player, meanwhile, tries to protect their backside. The scramble raises emotions and gets the competitive juices flowing; the youth aren’t “flipping their lids” in anger but their physiological responses are similar. They’re revved up and excited.

When a tiger loses their tail, the duo must step out of the game and take to the wall and do 10 seconds or so of “wall pushes” or deep breathing until they, as a team, determine they’ve “regulated” they can rejoin the game.

This rule helps leaven this competition. It’s not a “winner take all” type game, which is important for youth who may have experienced many life disappointments. It is, however, high action and enables multiple opportunities to self-regulate.

The game is not that different from typical PE games, Bracken says, except it includes and focuses on that key recovery or wind-down moment. Games in the wider world do not.

And that’s critical for youth who’ve endured trauma and are learning to gain control of their emotions.

The high energy, large-muscle games, which can be played during the youths’ daily recreation hour or any other time available, are just one piece of a larger mosaic. Texas Model activities also include quieter pursuits, such as art, music, poetry and meditation activities, 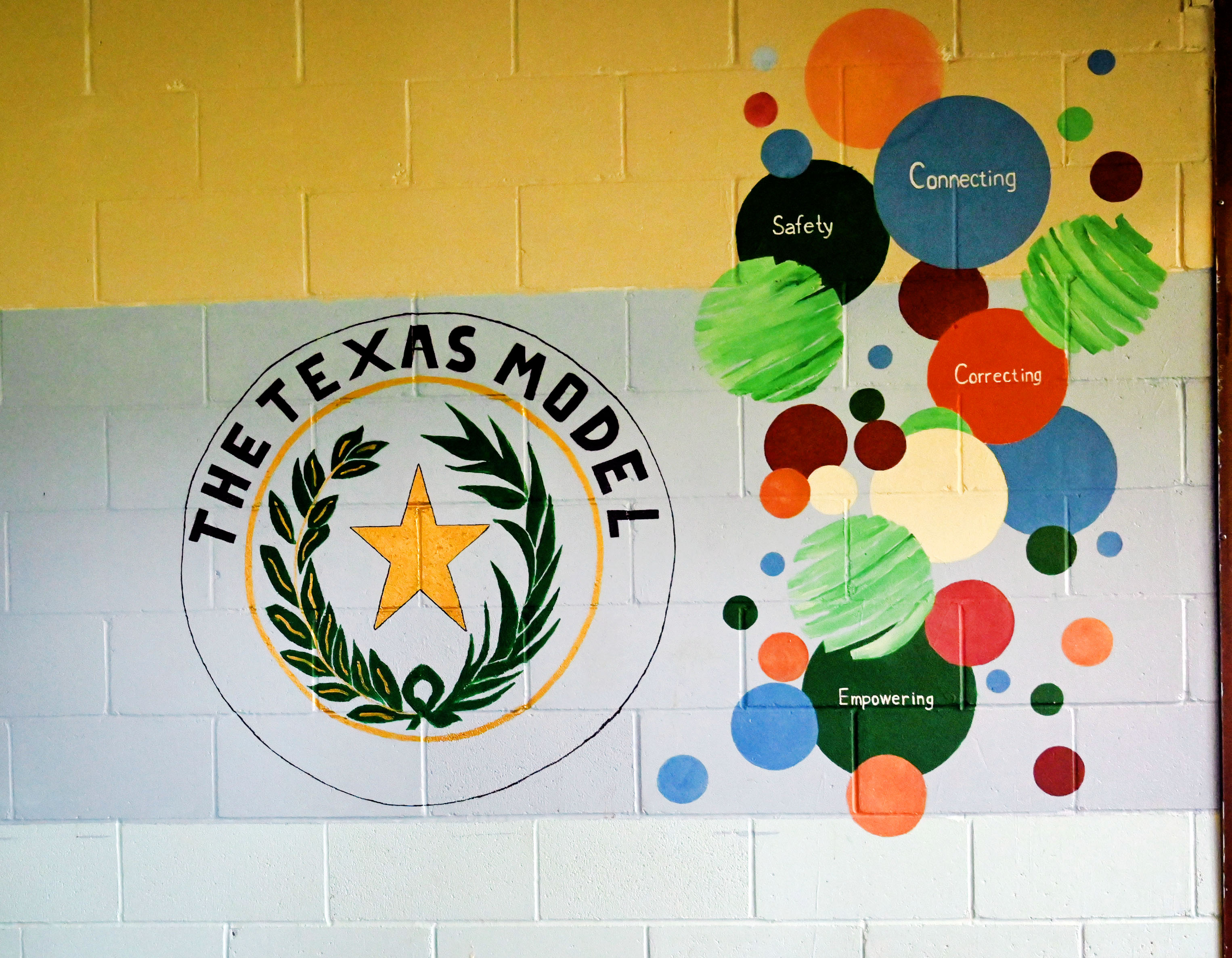 outlets for youth who may be more inclined toward the fine arts.

Sometimes the large-muscle games follow “Nurture Group,” another component feature of the Texas Model that involves a talking session in which the youth relax and discuss their moods, accomplishments and concerns. Nurture Group follows carefully prescribed conventions -- such as the “check-in” in which youth verbalize how they’re feeling and the “no hurts” rule -- that help youth relax, communicate better and bond with each other and their staff in protective setting that teaches caring and encourage expression.

It’s all calibrated to help youth build that foundational trust that will enable and deepen all their experiences at TJJD and beyond.

Participation in all types of games is open to all. Stakes are kept low and staff aim for a light touch, engaging with empathy and humor, where appropriate. (Remember? It’s hard to be angry while you’re smiling and laughing.)

Getting excited is OK too. Bracken gets a tad animated himself, explaining how the Tiger Tail game and another one, called Alliance, shake everyone up as part of the long game toward healing.

“Well,” he says, “because what we know about the brain is that it learns from experience.”

Photos: 1) Staff at Giddings State School play a game during a training; Troy McPeak (tan shirt, center) directs the game 2)Youth and staff play a wheelbarrow game during Nurture Group activities at Ayres Halfway House in San Antonio -- afterward they'll wind down with a calming activity 3) Staff and youth at Ayres House toss a soccer ball that serves as a "talking feather" because it's imprinted with questions to get conversations started; Ian Bracken (middle rear) looks on 4) The Texas Model aims to keep youth safe as they learn emotional control; this graphic painted on the wall at Gainesville State School mentions some of the governing principles of Trust Based Relational Intervention, Connecting, Correcting, Empowering, which also are taught as part of the Texas Model.