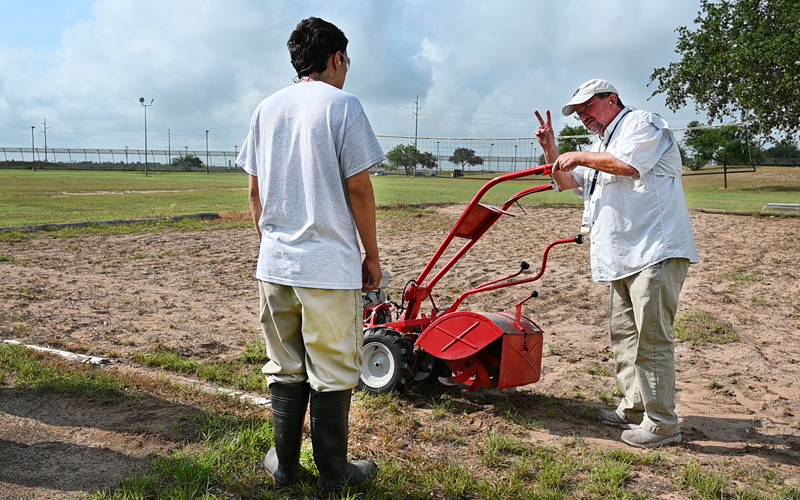 Horticulture teacher Timothy Hinds shows a youth how to safety start the garden tiller at they prepare to work on the compacted sand of the volleyball court.

The boys in Timothy Hinds’ horticulture class are almost always on a mission. They assess soil and mix compost. They design garden plots. They plant. They weed. They harvest.

And oh yes! They sample said harvest. Tasty carrots, onions, tomatoes, peppers and watermelon are key to the popularity of this vocational course at Lone Star High School South at the Evins Regional Juvenile Center in Edinburg.

The kale, meh, not so much.

But overall the tasting forays to the raised beds outside the classroom are happy moments and so are the days like this one when the youth get to operate the machinery.

Under a blazing morning sun, the boys are eagerly trying their hands at starting and maneuvering a roaring motorized tiller. This mission: To ready the volleyball sand court for play, and in the process, master the boisterous tiller.

While some of the teens watch from the shade of a nearby tree, others push the machine across the compacted sand pit, fluffing the soil in neat rows. By the time everyone has taken a turn helming the machine, half of the large playing area has been de-compacted; a solid morning’s work, before the boys rinse off, get a snack and head to their next class.

But teacher Timothy Hinds had noticed something more.

During the exercise, one of the students had stepped in to assist a new student with the tiller, helping teach the process.

TJJD youth are not always in a place, mentally and emotionally, where they can take such social steps forward, explained Hinds, who’s been teaching for 28 years, the last six at Evins.

Because the youth typically come from difficult backgrounds and experienced early traumas, they need space, patience and understanding before they can open up themselves and then reach out to work productively with their classmates.

“You have to be able to work with people, or you’re not going to work,” says Hinds, who switched from teaching math and social studies to horticulture four years ago.

“It’s easy when they’re already friends….but when you get people working together who are from different dorms and maybe they had even been in different gangs -- that’s a big accomplishment.” 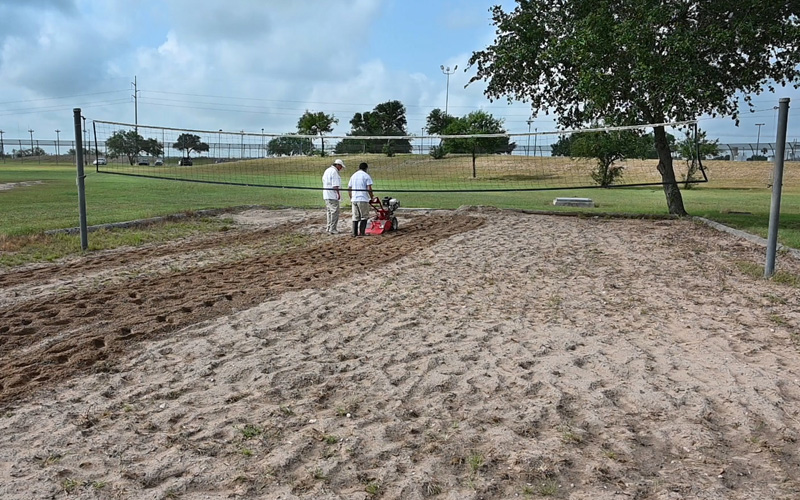 Hinds says the youth greatly enjoy the hands on experience of working with garden equipment, particularly the powerful tiller.

Hinds counts another accomplishment that’s not always immediately obvious, and that’s the achievement of normalcy. The boys tell him they “feel normal” when working in the garden or tending the landscaping around Evins’ offices. They forget their troubles and their transgressions.

Over the years, many students have told Hinds that working in the edible gardens in particular reminds them of when they helped their grandmother or another relative or friend in their garden.

Hinds believes these touchstone moments help the youth envision a brighter future, and connect the dots between their learnings today and possible vocations later.

Some of the youth will pursue gardening or landscaping as a career, or as a bridge, while they continue their studies or build work experience. But even those who don’t may  still use their horticulture learnings in home gardens.

Hinds teaches the class with that in mind, folding in life lessons and nuggets about earth science, chemistry (a good growing mix needs nitrogen, potassium and phosphorus, for starters) and math.

“I work a little math in there every now and then: What’s the volume of the materials needed? What’s the cost?” he says.

Hinds, who spent part of his youth helping a grandfather on a farm, imparts garden wisdom he’s picked up over decades and also follows a curriculum of the Texas Nursery and Landscape Association, which awards an “endorsement” to the students who complete the program.

In the garden, Hinds eschews synthetic chemicals and pesticides, because these can be dangerous for kids to work around and are difficult to store safely. So he winds up teaching the latest best organic practices, which he believes produce the best tasting fruits and vegetables anyway, even though this requires sharing plants, to an extent, with persistent pests.

The boys also have grown flowers, which go over big as gifts, but growing edibles goes on year-round at Evins, with the exception of the brutal hot middle of the summer. This equips the youth for jobs in nurseries, greenhouses and other enterprises. Such jobs can be hard and require “weather hardy” workers, but they’re almost always available, Hinds said. 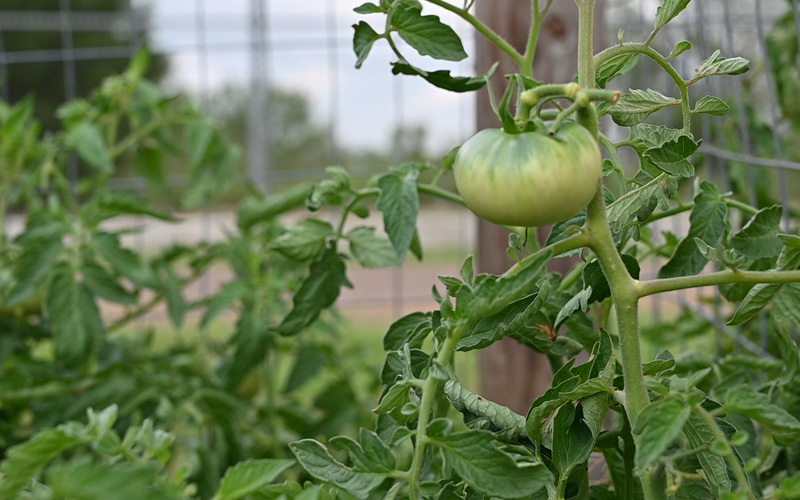 The youth grow a variety of fruits and vegetables, including several tomato plants that yield nibbles.

The same is true for landscaping work. Youth can nearly always find a job with a lawn mowing crew, and can even open their own business, making decent money. Others know someone who’s already followed this career path and can do the math -- $30 to $50 per lawn, multiplied by several lawns in a day multiplied by five days a week. “The kids think about that, and they know you can make a living at it,” Hinds says. One student in the class, cooled down after wrestling with the tiller, muses that he loves working outside, and finds that the smells of the earth and cut grass are calming.

“Right now, they’re eating some watermelons we grew. They enjoy it. They say, ‘We grew this.’ I say, ‘Yes, you did!’ So it’s a sense of accomplishment,” Hinds explains.

All right, this hasn’t happened with the kale. It was rejected it during an experimental appearance last year by everyone except two boys.  Spinach, bell peppers, carrots and tomatoes fare better, Hinds says, though some boys tell him they won’t eat the “store bought” versions.

It is also true that sometimes a portion of the garden’s bounty ends up the target of a prank. Watermelons and cherry tomatoes have gone MIA.

These small heists are not the work of students in the horticulture class, Hinds believes, but are masterminded by other students. Sometimes, they provide memorable teachable moments.

Once students who’d dramatically demolished a watermelon confronted Hinds with the news. As they smirked about destroying the horticulture’s class treat, Hinds nudged them toward a realization.

“I told them, you know, my watermelon’s home in the refrigerator. ‘Whose watermelon did you destroy?’

“Oh, yeah. It took them a while, but…they understood.” 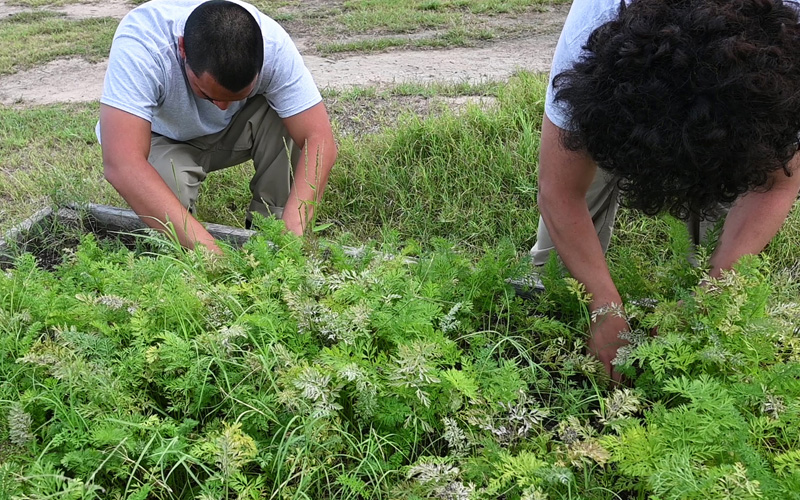 Youth in the class prep and weed the garden’s raised bed of carrots, which they also get to sample.

These are the valuable lessons that aren’t in the horticulture book, but follow naturally as Hinds coaxes out the best behavior from Evins youth even as the youth  team up to conjure the best edibles from the soil.

And while Evins’ is certainly not the only school garden to deal with gremlins, it does see a range of issues, from root rot in the raised beds to occasional raised tempers and  recalcitrance among the boys in the class.

Hinds offers incentives for good behavior, such as playing music during workbook exercises, and also keeps alert to the boys’ moods and special needs. He lends an ear when they need to talk or lets them sit out if they’re having a difficult day, following the guidelines of the trauma informed approach that is integral to the Texas Model.

“It happens,” he says without rancor. “How we deal with each other when we’re having bad days, that’s kind of an important life skill.

At the same time, certain basic rules  must be followed. Hinds relays how a student in the class recently helped two new youth to agree to sit in their desks because it would make the class more fun for everyone (that is, the music could be played).  Later, the campus coach for Positive Behavior Interventions and Supports (PBIS), pulled the helpful student aside to reward him for good behavior.

“You’re going to get a reward for good behavior (at Evins), but we’re not going to focus on all the other stuff,” Hinds said.