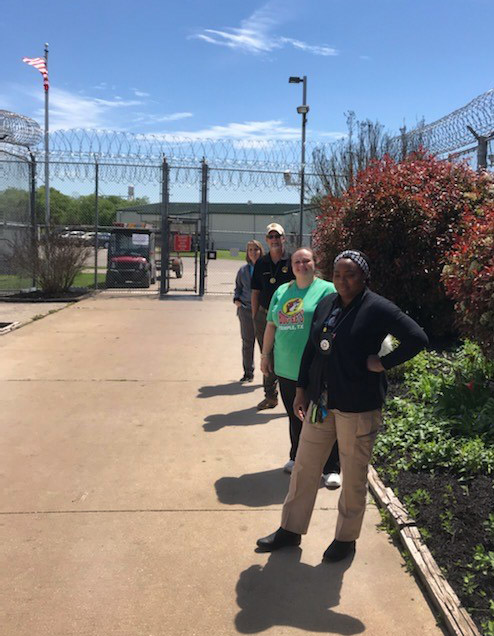 It was just another day as Superintendent Michelle Havranek and Assistant Superintendent Emily Shaw began the drive home after work at TJJD’s McLennan County State Juvenile Correctional Facility at Mart.

As the two reached a rise in Highway 164, they confronted a chaotic scene. A van and a truck had crashed head on moments before. The van, its front end crushed, had spun onto its side and was blocking the middle of the road. The truck had rolled into the ditch, and in each vehicle, a driver was trapped.

Havranek ran to the truck and saw that the young women driver, conscious but injured, was trapped by the steering wheel and tightly belted in. She told Shaw they would need to cut the woman out.

Luckily, Shaw had a box cutter in her car. She went to work cutting the seatbelts around the woman, while noticing flames growing near the floorboard inside the pickup.

Havranek rushed to the van and pulled out the passenger. She could not reach the trapped driver, but saw that flames were threatening that vehicle as well.

“We were all afraid that the cars were going to blow up,” Shaw said.

Havranek raced along the road, appealing to drivers for a fire extinguisher. The driver of an 18-wheeler produced an extinguisher and they used it to tamp down the flames.

“I was worried about the fire more than anything else,” said Havranek, a former police officer who took the helm at the Mart facility last year.

Meanwhile, Shaw eased the distraught woman from the truck in the ditch. Tugging quickly, while apologizing for causing any pain, Shaw lifted her through the truck window. She took the woman away from the burning truck. Havranek stepped in to help administer first aid to the woman in the other vehicle, using her shirt to staunch the woman’s head wound.

Shaw and Havranek resumed “running up and down 164 asking for fire extinguishers,” Shaw said.

By then, more TJJD staff had arrived to help. Officer Nicole Hoo of the Office of Inspector General (OIG), also on her way home, was handed the fire extinguisher that Havranek acquired from the driver of the 18-wheeler, and assisted with tamping the flames.

The local volunteer fire department and EMTs arrived. Firefighters squelched the flames threatening the vehicles and rescuers with Jaws of Life equipment pulled the driver of the van to safety.

“It was scary,” Shaw said, “but God put us there for a reason, for us to be able to help.”